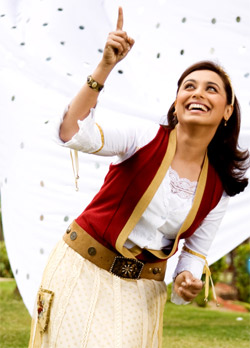 Bollywood actress Rani Mukerji, who is often admired for the elaborate saris and dresses she flaunts in her films, will be sporting just one outfit in her forthcoming film 'Thoda Pyaar Thoda Magic'.

'I wanted to create an iconic figure. If you look at Superman, Mr. India, Gabbar Singh and Mogambo, they all wear the same outfits in their films,' Kunal Kohli, the co-producer, director and writer of the film told IANS on the phone from Mumbai.

'I don't know whether it would succeed or not but that is what I wanted,' he added.

The film also gave Rani the opportunity to enact a scene while suspended in midair.

'It was for the first time that I got to hang from a harness while shooting for the film. I was very excited,' Rani said.

The film revolves around four children and a man whom they hate - till God sends down an angel to sort their lives out.