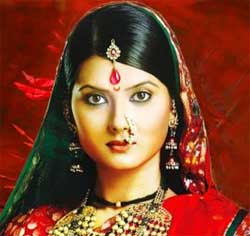 Kratika Sengar, the face of the young and valiant Jhansi Ki Rani, takes a break from her scary day and night schedule to talk to Tellybuzz.

The actress is measured when it come to talking. She does not utter any nonsense that is irrelevant to the topic at hand. She tells why not just women should look upto Rani Laxmibai but men too. She also lets us know that she is indeed passionate about her work as she scores a three on five in the rapid-fire questionnaire based on Jhansi Ki Rani!

Excerpts from our conversation…

Kratika, you got finalized and then made to wait for a long time until you could start shooting. How did you cope during the period of waiting?

I did not take that period as 'waiting' period. I made the most of it. I went out with family and friends, made sure I spent quality time with them before I start working. I got to see a lot of places and got to experience some really good times. Basically, I enjoyed the time instead of coping up with it.

Tell us about the training you went through. Also the mental preparation from your end to portray Jhansi.

I trained for about 15-20 days in horse riding, martial arts and swordfight. However, I feel I had less time. I started shooting on 6th of June and it started getting telecasted on 8th june. It all happened somewhat faster than I was ready for. But once I saw myself on screen, I could see myself there and somewhat get encouraged. The feedback from people also helped. Mentally, all I can say is that I had prepared myself up for a big challenge. Thoda pressure to tha (there was slight pressure) because Choti Rani had established herself and I needed to keep the viewers interested inspite of the change in Jhansi Ki Rani.

Ulka made a statement that went – 'People tell me they stopped watching Jhansi because I am not part of it'. Did it increase your trepidation?

The whole show of Jhansi was conceptualized as a project without finalising the actors. If I'm not wrong someone else was supposed to play Choti Rani…Ulka came in the picture much later. Also, when she interacted with me, she was very nice to me. I never got any vibes that suggested something as in the statement that's been made.
And from the comments that I've been getting everybody's liking me right from day one!

Challenges are a part of life. So what has been your challenge in portraying Jhansi Ki Rani?

My biggest challenge was staying away from my family. I'm a very homely person, so when it came to staying away from all of them for so long, it became a huge emotional blow. But this feeling got swept away once I started working. Now I'm so busy I hardly have time to miss anyone!

Do you see glints of Jhansi inside of you?

Jhansi Ki Rani is a person who took on the British rulers at a time when feminism was almost non-existent. To tell you the truth, I don't think anyone can even compare to the dust of her feet. Today there's only politics in politics…if you get what I mean… and no essence of patriotism, as opposed to how Laxmibai ruled her state. Now that you've compelled to give a thought on this the only streak of similarity that I see between me and her is that we both fight for what's 'right'.

What should the girls in today's time learn from Jhansi Ki Rani?

Today's girls are very smart. They know how to handle pretty much all the situations. I think not just girls, everyone should learn from Jhansi this one fact that we can't allow caste, creed or any other religious barriers to divide us. We should neglect all of that and look at the bigger picture which would eventually lead to the betterment of all of us.

Do you think Jhansi used to wear make-up?

Rani Laxmibai was very fashionable. She was fond of jewellery, diamonds were her best friends…white and blue were her favourite colours. She was a warrior princess, yes, but we shouldn't forget she was a woman too. And about make-up, I really have no idea whether they had it in those days or not!

Do you feel the spirit to stand up and fight for one's right has diminished in today's blas society?

I feel its all in one's upbringing. There are beefy boys who have all the strength to fight but just won't because they don't want to get involved. On the other hand, if your family has taught you to not give up, then you will fight at the cost of everything…which sometimes isn't good either. I feel the best thing is to maintain a balance between the feisty spirit and the indifferent one.

Apart from Jhansi, which women have been an inspiration to you?

Kalpana Chawla. Just like Jhansi Ki Rani, I got to know about her when I was in school and since she got imprinted on my mind at such a young age I can never fully get over her. If I think about it, then I may have a few more names …of women from various fields.

Inspite of the show bringing so much awareness of Rani Laxmibai's contribution to the independence struggle, her birthplace does not even have a proper memorial. Her legacy is struggling to survive in her own homeland…

I don't think I can agree with that. People literally unhe poojte hain (worship her).

The money that was granted to build a memorial was diverted to other projects. Even the land allotted is caught in some legal dispute.

Well, that is the sad state of bureaucracy in our country …but I'm positive very soon her memorial will be established.

You have been one of the lucky few to have found your love in your childhood friend. So post engagement what changes have you seen in your relationship?

No changes at all! In fact our parents are waiting for the day when we will mature so that we can tie the knot. But I guess it will take some time.

Birthdate: (19 November 1835)
Well I don't remember her birth date but I do know that she died in the year 1858…subtract 23 years from that na, that would give the birth year. You do the math.

Before getting ready for war, Rani Laxmibai tries for peace by writing to the British. How many letters does she write? (three)
She writes many no?

No she doesn't.
I guess three then.

The battle during which she breathed her last: (Battle of Gwalior)
I don't know that…

+ 2
12 years ago Ulka was gr8 as JKR...and now Kratika s also gr8 as the mature JKR..loved both in their roles...enjoyed when ulka was portrayin the younger JKR and now im still enjoyin the show when Kratika is portrayin the elder JKR...kratikas actin is also mindblowin..i can still see the strong, fearless, himmatwali Jhansi Ki Rani...sabko for dene wali..

12 years ago Ulka certainly cud anwer all those questions that she cudn't :|

12 years ago Kratika is really good as jhansi ki rani but i miss Ulka :'(

The JKR memorial needs to b bulit asap!!

+ 3
12 years ago memorial is needed, as we have memorials of people who ruined Bharat, The Rani really deserves a memorial!