With its prestigious guest list having become the talk of the town lately, Bollywood is all set to make it's presence felt at the Cannes Film Festival 2011. We already know that Sonam Kapoor, Aishwarya Rai-Bachchan, Mallika Sherawat, Freida Pinto, Minissha Lamba, and Saif Ali Khan are to be in attendance. It has now been confirmed that India will also be sending three more representatives to the illustrious event. 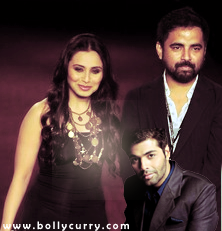 The first of these new ambassadors is the Bengali queen herself, Rani Mukherjee, who has now confirmed that she will walk Cannes' Chivas Red Carpet on May 18. Rani will be accompanied by director and friend, Karan Johar, and her equally dear designer Sabyasachi.
To catch BollyCurry's sizzling coverage of the grand event, tune into the Cannes Film Festival on May 18!