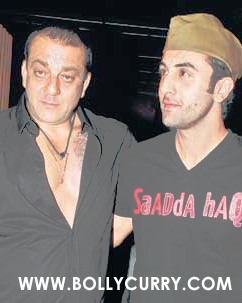 new friendship. Nope, not another of his not so platonic 'just friends' escapades, thankfully!

This time it's the 52 year old Munnabhai of B-town, aka Sanjay Dutt. The 29 year old Ranbir Kapoor who was surprised with a birthday bash at a Juhu nightspot, thrown by Rockstar producer Ashtavinayak, was deeply moved by Sanju Baba not only showing up to wish him but actually gifting him a motorbike worth a whopping 30 lakhs.

Facts so go, that Ranbir and Sanjay are neighbours. They reside around the same block in Bandra, and share workout regimes at the same gym - because although Ranby has his own personal trainer, he is heard to look up to the very fit and muscular Dutt for tips every now and then. Cliche perhaps, but quite plainly, the older actor has seen the younger Kapoor scion grow up, and has that elder brother fondness for him.

The affections seem to also be adding professional advantage, as Sanjay is now planning to cast Ranbir in a remake to his father's film Mujhe Jeene Do, in the lead role.

In this industry of make and breaks all around, we hope this bond sustains the test of time and grime!