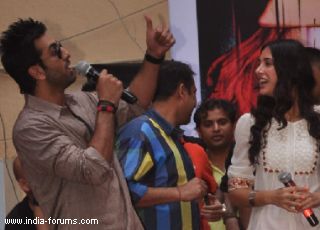 Mumbai, Nov 22  It seems post 'Rockstar', Pakistani-American model Nargis Fakhri and Ranbir Kapoor are no more interested in being perceived as a couple.

On Wednesday night at a party at the Grand Hyatt thrown by a leading celebrity-management company KWAN, Nargis chose to be accompanied by a female friend, while Ranbir came with his father Rishi Kapoor.

Throughout the evening Ranbir and Nargis were in separate sections of the party.

'Nargis and Ranbir hardly spoke to one another. This was an important evening for Nargis, as it was her first appearance independent of the 'Rockstar' events. And she made it clear that she was there at the party to meet the who's who of the entertainment industry, something that she had not been allowed to do during the shooting and publicity of 'Rockstar',' said a source from the party.

Director Imtiaz Ali kept Nargis away from the prying eyes of shutterbugs and allowed her to interact with media only during the pre-release promotional events of 'Rockstar'.

The party was her first chance to meet the Bollywood and she made the best of it.

According the source, Nargis was at her charming best at the party trying her best to mingle with the guests -- many of whom she didn't know -- enjoying her maiden appearance post 'Rockstar', leaving behind the team that she had been fastened to for the past one year, and that included Ranbir.

'This was clearly Nargis's evening. She made herself popular that evening, spoke to a lot of people in the industry including, yes, Deepika Padukone, with whom she got along famously. She was clearly in her elements with everyone, including Rana Daggubati and Genelia D'Souza who had flown in specially for the party from Hyderabad where they're shooting together for a Telugu film,' said a source from Kwan.

'Nargis was warm and inquisitive, eager to make the best of her first appearance outside the sheltered, protective environment of the 'Rockstar' team. And she blossomed under all the attention that she effortlessly got that evening,' the source added.