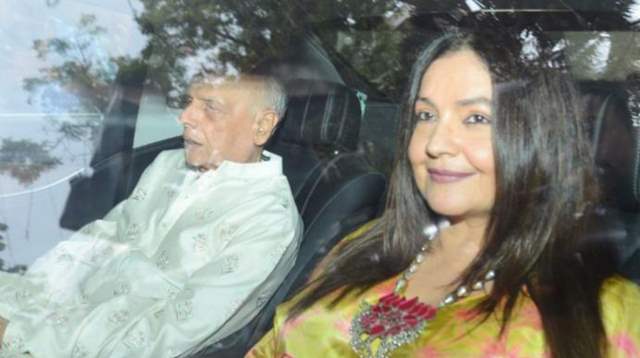 The much-anticipated Bollywood wedding's pre-wedding festivities have finally begun. Ranbir Kapoor and Alia Bhatt are getting married in a matter of days.

Ranbir Kapoor and Alia Bhatt's wedding festivities have kick started and the first function is Alia's mehendi ceremony which is being held at the couple's residential building in Pali Hill, Bandra. Sanju actor's family members have been arriving at his home since the morning. Many celebrities are in attendance at the Mehendi ceremony of the stars, including Neetu Kapoor, Riddhima Kapoor Sahni, Kareena Kapoor, and Karisma Kapoor, as well as pals Karan Johar and Ayan Mukerji. The ladkiwaale's have now made an appearance too with Mahesh Bhatt, Pooja Bhatt, and Rahul Bhatt among the first few to arrive.

Mahesh Bhatt, Alia Bhatt's father, was seen in the photos looking dashing in a white kurta Pyjama. He and his daughter Pooja Bhatt were sitting in the backseat of his automobile. Pooja looked lovely in her traditional yellow outfit. The director was spotted welcoming the photographers by folding his hands. Pooja, on the other hand, waved at the cameras while flaunting her tiny Mehendi design.

The Bhatt family is around Alia while the function of the mehndi celebration has just begun with Karan Johar's arrival, who wore a yellow colour kurta, which matches the mood of the day.

Today morning, Ayan Mukerji shared a teaser from Brahmastra’s song Kesariya and wished his BFFs Ranbir and Alia love and luck for their wedding. The security has already been beefed up outside their house. Now, fans are eagerly waiting for the couple to make it official.

3 months ago Didn’t see her flaunting anything. misleading headline