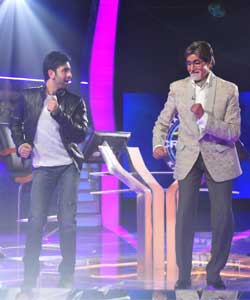 Ever since its inception, Sony TV's  Kaun Banega Crorepati 5 has had sky raising TRPs. The show gave not only the aam aadmi but also several Bollywood personalities a chance to rub shoulders with the mahanayak, Amitabh Bachchan.

After Saif Ali Khan, Deepika Padukone, Katrina Kaif, Sonam, Shahid Kapoor and Imran Khan, Ranbir Kapoor will grace his presence on the hot seat. He will appear on the show to promote his upcoming movie Rockstar and also to pay a tribute to his Granduncle, Shammi Kapoor.

A jovial side of the actor was exposed on the show as he was seen in a carefree mood, dancing laughing and playing pranks on the set. In one such incident, Ranbir decided to play a prank on his dear friend Ayan Mukerji. While using one of his lifelines, Ranbir called Ayan and spoke to him imitating the Big B himself.

However, Ayan blankly understood his intentions and left everyone in splits including the host Amitabh Bachchan.

This indeed will be an episode to watch out for. So Ranbir Kapoor fans, it's time to rejoice!

shivani003 9 years ago Lol yea that was funny in the promos. Just love it when he's in his prank playing mode!

baisakh45 9 years ago my love is coming...waiting eagerly for this episode.

J3ny 9 years ago Waiting for this episode to be telecasted..RK rocks...