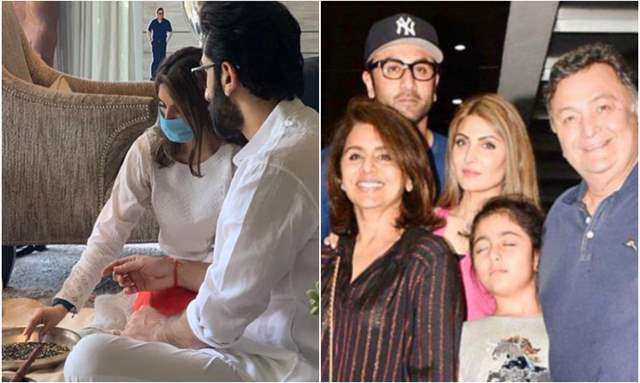 It’s been almost one year since Rishi Kapoor’s demise but there isn’t a day when his family members do not miss him. On the occasion of his 11-month prayer meeting, the late actor’s wife Neetu Kapoor and daughter Riddhima Kapoor Sahni remembered him with heartfelt messages.

On Thursday, the Kapoor family performed a puja for late Rishi Kapoor. In a picture shared by Riddhima Kapoor, she can be seen doing the rituals with her actor brother Ranbir Kapoor. Dressed in white clothes, the siblings can be seen praying for their late father. Sharing the picture, Riddhima wrote, "Always watching over us ! We miss you'

Riddhima also took to her official Instagram handle to share a throwback family picture featuring her late father Rishi Kapoor, mother Neetu, Samara and Ranbir Kapoor. She also penned a heartfelt note in his memory that is sure to touch your heart.

“Your love will light our way- Your memory will forever be with us! Always in our hearts”, Riddhima wrote. As soon as shared the touching note, Ekta Kapoor, Dabboo Ratnani, Manish Malhotra, Sophie Choudry among others dropped sweet comments under her post.

Rishi Kapoor’s actor wife Neetu Kapoor also shared an unseen video from their London trip wherein the late actor can be heard happily crooning away a song from the film Aa Ab Laut Chalein. "Since today is Rishiji’s 11 month prayer meet felt like sharing some moments from our last trip to NYC" Neetu Kapoor wrote in her post.

Bollywood’s OG chocolate boy, Rishi Kapoor left too soon and breathed his last on April 30, 2020, after battling with cancer for the last two years.

In a sad turn of events, another member of the Kapoor family, Rajiv Kapoor passed away on February 9, 2021, after suffering a cardiac arrest. On February 9, Randhir Kapoor had rushed his brother Rajiv Kapoor to the Inlaks Hospital, near their residence in Chembur. However, the doctors had reportedly declared him dead on arrival.