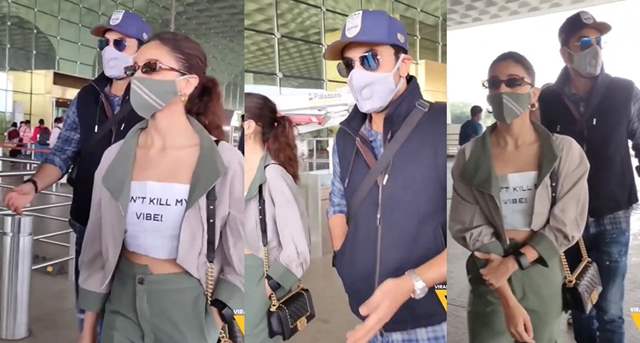 Ranbir Kapoor and Alia Bhatt are back to rock the tinsel town with their lovey- dovey tales! The stars who are also among the most-talked about couples of B-town leave no stone unturned when it comes to expressing their love for each other.

Be it confessing their love for each other publicly or making joint appearances at several events, Alia and Ranbir Kapoor have become the IT couple of Bollywood. But, despite that, they still make sure to guard their relationship and keep it private!

Today RK and Alia were spotted at the Mumbai airport leaving for Goa for a shoot and soon after the duo stepped out together, their photos and videos went viral on social media and in one such video we can see the paparazzi, waiting to cover RK and Alia at the airport asking them to pose together.

However, the Junior Kapoor makes sure to give a witty reply when asked to do so. He said, "Saath mein aake kya karenge (what will we do by coming together)". To this, pap sent out a compliment saying that they look good together.

In the video we can also see Ranbir being his usual handsome self while dressed in his trademark casuals. He was seen sporting a pair of jeans, his signature check shirt and a jacket along with a cap.

Alia, on the other hand opted for a chick look with a crop top, loose pants and a jacket.

On the work front, Alia Bhatt and Ranbir Kapoor are gearing up for their film Brahamastra where they both will be seen in lead roles along with megastar Amitabh Bachchan in a pivotal role. The film is a fantasy-adventure drama and is helmed by Ayan Mukerji.