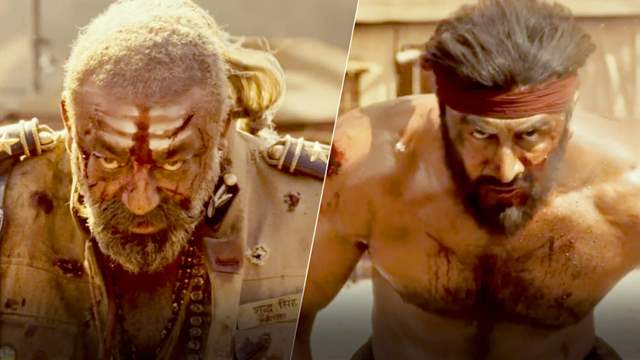 Superstar Ranbir Kapoor, is playing a larger than life quintessential Hindi film hero with the action entertainer Shamshera. Ranbir, who is coming to the big screen four years after he delivered the blockbuster Sanju, is relishing the casting coup in the film that pits him against Sanjay Dutt! Sanjay, who has delivered some of the most epic villains on screen, is thrilled to give us a more evil, merciless, cold-hearted brute force of nature, Shuddh Singh in Shamshera. Sanjay Dutt vs Ranbir Kapoor makes Shamshera a big screen spectacle to watch out for.

“It’s amazing that Sanjay Dutt is my antagonist! When I was 10 or 11, I had Sanjay Dutt’s poster in my cupboard. Then eventually getting to play him in a biopic directed by Rajkumar Hirani was a dream come true. And finally getting an opportunity to work with him, to act with him, where I am the protagonist and he is the antagonist, it’s incredible! Sanjay Dutt has given us some epic villains with his brilliant acting performances and people are going to love him as Shuddh Singh in Shamshera!”

Sanjay is collaborating with director Karan Malhotra again after Agneepath. Sanjay had given us a villain for the ages as Kancha in that film.

Sanjay says, “I love playing the villain and Karan Malhotra loves to give me characters like these. I guess people love to see me as a villain on screen and I’m happy that all the films in which I have played a villain have been loved. I wish the same for Shamshera because Karan, Ranbir and the entire team have worked really hard on the film.”

Ranbir says Sanjay’s presence in the film as an antagonist has made Shamshera an anticipated project amongst audiences. He further exclaimed,

“I have so much love for him and so much respect for him. He is such an amazing actor. You know even though he has played the antagonist in so many films, he still makes it different, he still makes it believable. It goes back to the old notion that a hero will only be impactful if the villain has a looming presence and I don’t think there is any actor in the Indian film industry who has the presence that Sanjay Dutt has on screen.”

The story of Shamshera is set in the fictitious city of Kaza, where a warrior tribe is imprisoned, enslaved and tortured by a ruthless authoritarian general Shudh Singh. This is the story of a man who became a slave, a slave who became a leader and then a legend for his tribe. He relentlessly fights for his tribe's freedom and dignity. His name is Shamshera.

The high-octane, adrenaline-pumping entertainer is set in the 1800s in the heartland of India. It has the big promise of a never seen before Ranbir Kapoor, who plays Shamshera in the film! Sanjay Dutt plays Ranbir’s arch-enemy in this huge casting coup and his showdown with Ranbir will be something to watch out for as they will ferociously go after each other with no mercy.

Directed by Karan Malhotra, this action extravaganza has been produced by Aditya Chopra and is set to release in Hindi, Tamil and Telugu on July 22, 2022.

+ 14
1 months ago Sanjay Dutt in Agneepath was AMAZING! In this one, villain kaam aur comedian zyada lag raha hain