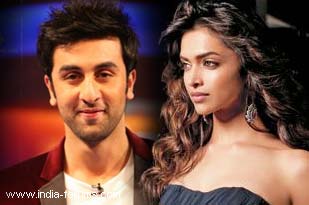 New Delhi, Sep 21 Their personal chemistry may have gone a bit sour after their break-up, but Ranbir Kapoor and Deepika Padukone will romance on the silver screen in Karan Johar's new production 'Yeh Jawani Hai Deewani'.

It will be directed by Ayan Mukherjee of 'Wake Up Sid' fame.

'So hey... Ranbir and Deepika will be in Ayan Mukherjee's next titled... YEH JAWANI HAI DEEWANI!!! The wake up sid boys on the floors from Jan!!' Johar announced on micro-blogging site Twitter.

Deepika and Ranbir, who dated each other for over a year before heading for splitsville in 2009, were last seen in 'Bachna Ae Haseeno' in 2008, and their crackling chemistry was there for all to see.

For now, Johar is busy directing 'Student Of The Year', which will see three newcomers -- Alia Bhatt, Siddharth Malhotra and Varun Dhawan -- entering the film industry.

'Am back on the sets of STUDENT OF THE YEAR (SOTY)!!! The young energetic crew makes me feel like a geriatric!!!' added the 39-year-old filmmaker.

Nawazuddin Siddiqui shares the best compliment he received ...
51 minutes ago