View Profile
It was the first time RGV visited the sets of someone else's film and is all praises about it. The director dropped in on the sets of Mallika's 'Hissss' and was very impressed with what he saw. 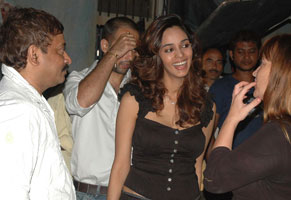 Featured Video
Apparently RGV heard about the film from Mallika and immediately expressed his desire to visit the sets to see how Robert worked on creating the much-hyped 'naagin' of the film.

Mallika then invited RGV to the sets and the director was so impressed with Robert's work and the treatment of the film that he went on to say that "Hisss" has the potential to become one of the greatest films made in India.

In fact, the director also expressed desire to work with Robert for one of his films in the near future.