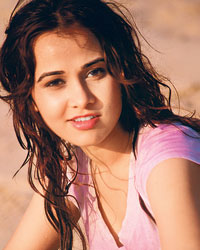 Athirapally forests was suspended after the film's heroine Priyanka Kothari was injured.

The production controller Chalakudy Mani Tuesday confirmed that Kothari has been injured.

'This happened the day before. When the actress jumped into the stream, her leg hit a stone in the water. Yesterday the same scene was re-shot and she injured her leg, which now has been put in plaster. Following this, the shooting of the film has been suspended. The heroine has been asked to take rest for a few weeks, and once she is ready, the shooting will resume,' said Mani.

The shooting was supposed to be completed later this week. With the injury, now the shooting will be delayed, he said.

A major portion of the filming was done in the Sigiriya jungle of Sri Lanka.

This is the second time that the ace director is shooting in Kerala. Earlier in 2006, he shot in the picturesque Munnar hills for the Amitabh Bachchan-starrer 'Nishabd'.

Athirapally forests now have become a hotspot for the Bollywood industry. Last year, Mani Ratnam was here for his film 'Ravana'.Athirapally is about 60 km from Kochi.

Nitin, a Telugu star, and Priyanka Kothari are the main leads in the film.

exclusive
Exclusive Shashank Vyas questions the need for IPL 2020: What good has ...
13 hours ago