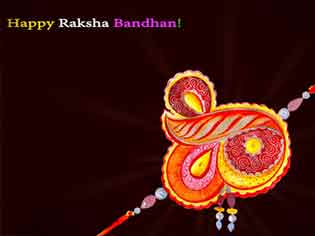 Beaded and bejewelled threads don't tempt you anymore? This Raksha Bandhan, follow the trend by picking out rakhis with superhero logos like Doraemon and Superman or idols like Lord Ganesha to tie on your brother's wrist.

Chandigarh girl Leena Sharma has for long been celebrating Raksha Bandhan with her two brothers. And the 28-year-old says that from a simple thread, she has now graduated to something more "cute" - Chhota Bheem, an animated superhero with a difference.

"I am thinking of buying superhero rakhis this time. They look cute. For instance, my younger brother likes Chhota Bheem, so I will probably get him that," Sharma told IANS.

Superheroes and idols inspired rakhis sell like hot cakes and Sharma will opt for the former.

"We are Hindus and I fear that if my brother breaks the rakhi or stops wearing it after a while, it will be more like an insult to god," she said.

"My brother is over 30 years and designs inspired by god are more mature than superhero ones. I would go for Lord Ganesha rakhi," said Nanda.

And it's not just her who is spending on such rakhis.

"Deities-based rakhis, especially Ganesha or Om, are very popular. They are bought by women across ages," said Radhika Ghai Aggarwal, COO and co-founder at ShopClues.com, which mostly has customers in cities like Ahmedabad, Ranchi, Delhi/NCR and Pune.

But she quickly adds that children opt for superhero rakhis more despite its high cost.

"Doraemon is one of our fast selling rakhis and it is priced at Rs.790. Spiderman is also fairly popular. Kids are more interested especially those below 10," said Aggarwal.

The middle-aged women with deep pockets are also willing to shell out on gold dipped ones with god or superheroes designs.

Designers Kajal Bihani and Mitali Kalantry of The Anouk, which specialises in high value clutch bags and jewellery, are offering Panch Dhatu and Superman logo rakhis, among other designs and Bihani says that the sale is good.

"The Superman logos are doing well. They are all gold dipped and cost Rs.550. The Panch Dhatu is priced at Rs.1100 as it is made of gold, silver, copper, zinc and iron. People love them. The emotions are more important than the price. Some of them even spend as high as Rs.1, 00,000 only on rakhis," said Bihani.

"These pure silver Rakhi pendants have motifs of Lord Ganesha and Om to provide the customer with a sacred band of love that rakhi is supposed to be. And aren't most of us clueless about what to do with the rakhi once you taking it out. Our pendants come with a chain so that it can be worn as a pendant for the time after rakhi," he added.

So deep pockets or not, sisters are doing everything to make their real life heroes happy.