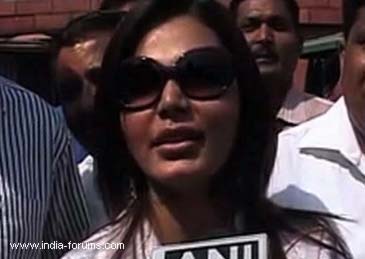 Television actress Rakhi Sawant Monday visited parliament on the first day of the budget session, saying she wanted to see how it works.

"No one invited me. I just came to meet the MPs. I've come to see parliament, to see how it works and how our leaders are working," she told reporters.

"I've come to convey the message to (Congress chief) Soniaji (Gandhi), on behalf of all the people and women that there should be something for women in the budget and it should be fair to everyone," she said.

Advising yoga guru Baba Ramdev not to dub all politicians as "thieves", she said he should do yoga and not abuse others.