With most of the renowned celebrities of the film fraternity making guest appearances on Star Voice of India Chhote Ustaad to boost the morale of the contestants, the television stars are not left too far behind. This Saturday's episode of Chhote Ustaad will see well known faces from the television industry like Jay Bhanushali, Shabbir Ahluwalia and Yash Tonk making an appearance on the show to make a special appeal for votes for the singing glories of the contest. 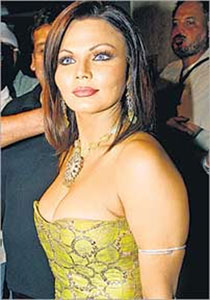 Featured Video
But there were rumours that Rakhi Sawant was to be a part of this special appeal. So then why has she been bumped off the show? Is it because of the whole Nach Baliye fiasco and her related problems with the channel? When the Telly Buzz team asked the same to the producer and director of the show, Gajendra Singh, he said, "I have nothing against Rakhi. I, in fact share a very good rapport with her. We did not take her for the vote appeal this week because I wanted her to join the show next week. I really do not know from where this issue started."

Annotating on the Nach Baliye issue and Rakhi’s consequent problems with Star Plus, Gajendra further adds, "I really do not know whether the channel has any problems with Rakhi after the Nach fiasco. The only thing I can say is that, the channel is far bigger than any individual and even if problems persist, I think the channel should move on. I will talk to them and see if such a problem arises, otherwise I have no problem at all in bringing Rakhi on my show."

Wel, no matter where Rakhi Sawant's name crops up, the lady is always bound to create a storm. Now was Gajendra Singh trying to cash on the belle's fetish for creating dramas to gain good TRP's for the show, or was it just a pure misunderstanding, yet remains to be decided?

+ 2
14 years ago i love her!
how is she AN attention seeker?its not her fault if ppl alwyz wants her in a spotlight okies but yeah she's a drama queen and so r most of the ppl so i dont see nuthing wrong wth her!!tolove her!she ishh shoo funny!rofl.

14 years ago thank god if she goes it will be on the show i dont watch. i wouldnt be able to bear her on SRGMP. she would ruin my favourite show.

14 years ago kudos! This is really awesome. I love the quotes. They really fit in the article well.