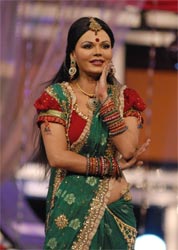 Rakhi Sawant is the one who you would love to hate, but you can never ignore her!!  After trying her hand at various reality shows from Bigg Boss, Swayamvar to Rakhi Ka Insaaf, she is now geared up to tickle the funny bones of viewers as a participant in Sony's Jubilee Comedy Circus..

However, we hear that the lady is having a tough time adjusting to the rigorous schedule.. And the news is that she is upset with the channel too...

An insider from the set quips, "Rakhi actually demands to get her script in hand three days before the shoot of the episode. However, the participants get their script only one day prior to the shoot. Rakhi is finding it very hard to rehearse and is always seen in an upset mood on sets.  But the irony is that even after not getting her way in the show, the lady ends up having the last laugh, as she has been giving her best on the stage".

When contacted, Rakhi Sawant explained her stance, "Actually I am doing comedy for the first time; I don't want to take the risk by not rehearsing, because at the end of the day I am going to face the audience. When I had signed the contract for the show, the channel had in fact promised that we would be getting scripts three days in advance. But we are receiving the scripts just hours before the shoot. This is really bad on part of the channel, but having said this I am enjoying the show".

"Both my partners Rajeev Nigam and Krushna Abhishek are superb and help me with the acts. And I am happy that viewers too like my performance", adds Rakhi.

Guess it is so far so good for Rakhi in Jubille Comedy Circus..

11 years ago Okkkkkkkkkkkkkkkkk y so much of hatred towards some1 whom v dun know for real!!! ok i agree she is a big DRAMAQUEEN but tat doesnt mean we use vulgar language towards herl... she din come upto ne of us and sweared at us on our faces.. so cool it down guys.. if u dun like sum1 tats alrte but tat doesnt mean u have to use language and crap on tat person!!!

11 years ago hmmmmm
jaha rakhi ho waha koi na koi drama toh hota hi hai.......
its not new thing
i donno how dose girls of ZND hav tolerated her for dose many days...........
uff my aditi n kritika dnt dey got pissed of with her.....
nd dat imagine tv wich always supports her for her silly shows

11 years ago i don't like her cheapness which she creates, but i like her guts and confidence, at the end of the day she came to the industry with out any godfather

+ 4
11 years ago hate u rakhi with all my heart!!hope whatever u do is a big flop!and who told her that viewers lyk her?HER?!!!ewwww

11 years ago Rakhi Sawant explained her stance, "Actually I am doing comedy for the first time;

+ 4
11 years ago @Neetu_PB_Lover - Mind your language unless you want to be Rakhi Sawant of IF.