Casting aside her item-girl image, Rakhi Sawant has bagged a full-fledged dramatic role in Yash Raj Films' new venture that she hopes will result in a flood of offers.

'So far my career in movies didn't take off because I don't have a lobby to support and sign me. That's the only explanation I have. But people love Rakhi Sawant,' said Rakhi, who was seen in Rakesh Roshan's 'Krazzy 4'.

'Now, I've finally got a film I'm proud of with the best banner. After this, I'm sure I'm going to be flooded with good offers, and not just to do item songs, although I've no godfather in the film industry,' she told IANS.

Directed by debutant Anurag Singh, the yet to be titled fil 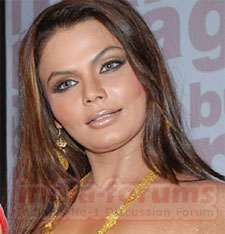 'She is my favourite actress. I love Rani. She's a superstar, but so down to earth. I'm going to take blind instructions from Rani about how to do my scenes. And I've no ego about it.'

It wouldn't be improper to point out that Rani had borrowed many of Rakhi's mannerisms and speech patterns to play the tart with a golden heart in Sanjay Leela Bhansali's 'Saawariya'.

Rakhi, who starts shooting with Rani and Shahid July 17, is about to be turned into a typical Yash Raj heroine and the man given the seemingly impossible job is designer Manish Malhotra.

'I've already started rehearsing. Do I play cricket in the film? My lips are sealed. Do I have item songs in the film? Hmmm... that would be telling. But, yes. I don't have just one dance. I've three dances in this film, choreographed by the one and only Vaibhavi Merchant. They're not just ordinary item songs.

'And I'm being dressed up by Manish Malhotra. I'm so excited about working with him,' Rakhi added.

So will Rakhi be playing cricket along with Rani in this film about women's cricket?

'Darling, if I reveal everything now why will you pay money to see the film when it's released? All I know is that the offer came to me without any lobbying. They saw my item song in 'Krazzy 4'. I guess they liked what they saw.

'All the credit goes to Jesus Christ, Mother Mary, Shani Bhagwan and Ganpati. These are the four pillars of my destiny,' Rakhi maintained.

'Nothing in my life has come easily to me, but now I'm very happy with my life. Thank you people. And thank you, media. Main media ki beti hoon (I'm the daughter of the media),' she added.