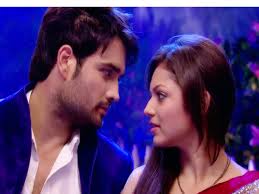 With all the other characters taking an exit, the makers of Madhubala - Ek Ishq Ek Junoon produced by Nautanki Films on Colors are planning to make things work the other way round which is focusing only and only on Madhu (Drashti Dhami) and Raju (Vivian Dsena).
Says a source, "As of now the news is that all the characters will be put to an end one by one and the story will completely focus on Madhu and Raju who are now married. Further there is a possibility that they will show that Raju will have a memory loss. Raju at present behaves like a child and Madhu is getting him treated and in fact he will be cured but the sad part is that after getting cured he will suffer from memory loss. He will forget all about Madhu and his marriage to her. It will be left to Madhu who will be heartbroken after this bitter sweet tragedy to pick up pieces of her life and try to bond them together again. On one hand she will be happy that Raju, her husband will be cured and will no longer act like a child but at the same time she will be sad that as an adult now he will no longer remember her."
So what happens next? "Madhu will take it upon herself to cure her husband Raju and when he forgets her she will then try to revive his memory with the help of the little things that they had shared between themselves."
Whether she is able to do so or not is to be seen but the makers are sure that with the story focusing on the lead couple again will generate the lost interest as the audience is eagerly waiting to see the romance between them yet again.
Well, after all the turbulence that the show has gone through we hope that this really works for producers who have gone all out to try and keep their loyal viewers happy all this time.
Seema Khot Mattoo
207 Likes razz 6 years ago Drashti and Vivian rock. Waiting for this track. Always wanted to see this.
Drashti is doing a great as is Vivian.
Will always support the show and them as a true fan.

Want to see u in some good project after MB hopefully movies...

Mahi78 6 years ago Loved U DD, will always adore, hope udo some strong role in ur next venture after MB.

faizaanwar 6 years ago My best wishes to Drashti Dhami... :-)
love u

aaree 6 years ago Drasthi dhami waiting to see u in a reality show. luv uu

MB CVs really suck...Though i wanted to see u in something new...bt since u r willing to continue so i hope dis twist works...nd CVs dont mess up this time