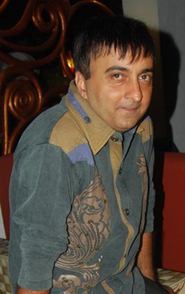 Bharat Ka Veer Putra - Maharana Pratap has always fascinated its viewers with its interesting stories from the illustrious past of India. Many characters that find a mention in our history books are portrayed on screen and that too in a very convincing avatar.

"The latest to join the bandwagon is Raju Shrestha who will soon be seen in the much talked about show Bharat Ka Veer Putra - Maharana Pratap on Sony TV. More famous as the child actor Master Raju he will enter the show as the character of Mian Tansen."

Tansen was a classical musician and a reputed poet known for his number of compositions. He was one of the Navratanas (nine jewels) in the court of the Mughal Emperor Jalal ud-din-Akbar. So how is his entry in Maharana Pratap justified?

"Tansen was born to a wealthy Hindu poet who also was an accomplished musician and Tansen's original name was Ramtanu Pandey. He was trained in both Hindustani classical music as well as Sufi music. Well, till now we have seen Meerabai and Akbar's entries in the show. If we dig into history we will find out that Akbar who had a great taste in art, culture and music once gets to hear a bhajan composed by Meerabai (Muskaan Nancy James) sung by Tansen. He likes the composition so much that he enquires more about it from Tansen who tells him that the original composition is by Meerabai. Akbar (Arish Bhiwandiwala) in his quest to meet the legendary poetess gets into a disguise and along with Tansen goes to Chittor fort to see her and hear her sing. He is completely mesmerized by her singing and offers his reverence to Meerabai. This might be the story which will justify the presence of Tansen in the show," concludes our source.

We tried to contact Raju Shrestha but he was unavailable. For the vierwers this is quite an interesting piece of history which you will get to see in Maharana Pratap.

exclusive
Exclusive Karan Arora recalls his scenes with Erica in Kasautii ...
47 minutes ago