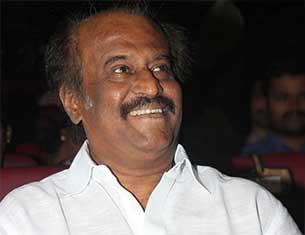 He's truly 'Thalaivar'! Cinematic icon Rajinikanth, who made his debut on Twitter Monday, attracted over 150,000 'followers' on his first day of joining the social networking platform.

"Salutation to the Lord. Vaaakkam Anaivarukkum! A big thank you to all my fans. Excited on this digital journey," read the first tweet by the thespian, who is reverred for his acting acumen.

His new movie "Kochadaiiyaan", directed by his younger daughter Soundarya R. Ashwin, is gearing for release Friday. Hence, Rajini's decision to make his presence felt on the digital world, seems to be well-timed.

He has decided to engage with his fans via the Twitter handle @SuperStarRajini.

Earlier in the day, Rajinikanth said in a statement: "I decided to start with Twitter because I felt that the platform is abuzz with all the news and the trends that happen across the globe and I'm told that this is where all the best Rajini one-liners are."

The 63-year-old, one of India's most prolific and influential superstars, Rajinikanth's mass popularity and appeal is largely drawn from his mannerisms and stylised dialogue delivery.

With his entry on Twitter, he hopes to interact with his fans.

For this, he has partnered with CA Media Digital's first venture, Fluence - a celebrity digital network - which will manage his digital presence.

"I am confident that I have the best team and the best guides who will help me connect with my audience," said the superstar.