One of ’s most renowned shows - The Sharpe Series, featuring Sean Bean of The Lord of the Rings and fame, gears up for its next season. Sharpe Series - A short seasonal series, which shows a battalion of soldiers in the 1900’s as they travel all around, will now hit . The series will highlight the East India Company and the related conflicts. Rajesh Khattar stars in the upcoming series - Sharpe Peril. The Telly Buzz team talks to the actor on his first international project and what’s in store with the show… 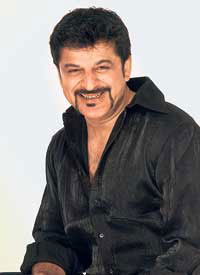 Featured Video
“I am playing a character called Officer Pillai, who’s a soldier of the British Army, and is one of the representatives of the East India Company. I am a soldier protecting the Maharani; he’s someone who’s quite loyal to his job”, says Rajesh Khattar on his character. The actor feels quite overwhelmed to be a part of a show like such as he says, “It’s a show directed by Tom Clegg, and starring Sean Bean. It’s a complete honor to share the same platform as them. The Sharpe series have been quite popular, catering to a viewer ship of over 20 million and it feels great to be doing this show.”

Further on shooting for the series, Rajesh states, “We’re going to begin shooting from the 3rd of March at Hajrav for the next month and a half.” But wouldn’t it conflict with his current shows? “Yes, I am under going some major date problems. I am currently doing a show on Star One and also am doing a movie with Shyam Benegal. The dates for the movie were clashing, as we were about to shoot a very crucial scene with Atul Kulkarni and the rest of the cast, but the story needs editing. We are still working on that. The production has been kind enough to me, by helping me travel, so I was able to maintain my shooting schedule. They have been very helpful and extremely professional. They had decided on the shooting date of 3rd of March  one year back, and they’re reaching exactly on that date. The unit is quite large, and for the first ten days, we’re going to be in Hajrav and then proceed to another location for the shooting", states the lucky actor.

On an ending note Rajesh states, “It’s going to be a great experience for me I am sure, and I am truly looking forward to the whole new phase of my life.”