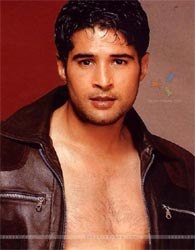 We all know that Rajeev Khandelwal of Kahiin Toh Hoga fame was to wed Manjiri Kamitkar by the year end that is after Diwali. In fact, Rajeev had himself confirmed to TellyBuzz via a text message earlier that he would be getting married by this year end.

However, the latest is that Rajeev's wedding has been postponed to February 2011. The actor who is basically from Jaipur has opted to get married away from home, and has apparently decided on a Jodhpur wedding.

Our source from the industry tells us, "Rajeev wants a royal and traditional style wedding in Jodhpur. Earlier Rajeev and Manjiri were to tie the knot in December this year, but the wedding has now been pushed to February 2011. The date is not yet finalized though".

We tried contacting Rajeev, and sent him a text message inquiring about the same, but did not get any revert till the time we filed the story..

The families of both Rajeev and Manjiri have apparently consulted astrologers and their horoscopes have been matched.