View Profile
These days are best for Rajeev Khandelwal to get into the ninth cloud. Ask why? The blue eyed television actor is yet not out of his Aamir hangover and has pursed a second film in his queue to capture Bollywood. The perfection and acting ability with which Rajeev 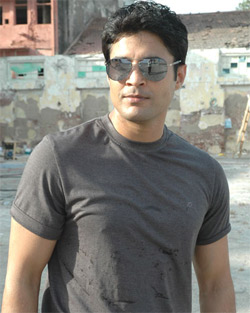 Featured Video
skinned into his character of Aamir was enough to predict his vivid future in the industry. And it’s now proved with the offer of the second film in a row.

The film, as signed with UTV Spot Boy which was the house to produce Aamir, is a love story titled as Peter Gaya Kaam Se which will be directed by John Owen, the India based British filmmaker.

The boy looks quite excited confirming the news. “Yes, my second film is a love story set in Goa. The film is titled Peter Gaya Kaam Se and I play the role of Peter,” smiles Peter, oops, Rajeev. Further explaining the character the actor adds, “My character is that of a taxi bike rider. These are people who drive tourists on their bikes in and around Goa.”

Being quizzed about to say little more about the film, Rajeev says, “We plan to shoot in Goa after the monsoon sometime in August. The female lead is yet to be finalized. It's not yet certain if it would be a fresh face or a known name. However, I would like a fresh face since it brings in a fresh chemistry. But the decision stays with my producer and director.”

Hmmm, it seems the fresh experience of facing 35mm has nurtured the fresh idea of getting fresh with new face only! Not bad, as much as audience feel fresh with Rajeev, sorry, Peter Gaya Kaam Se.