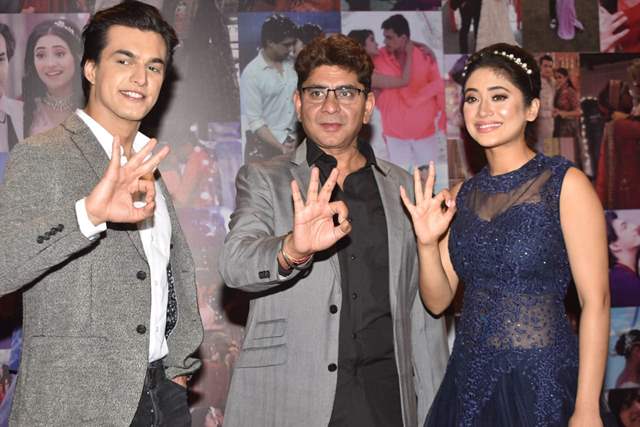 Rajan Shahi is extremely fond of the lead pair Shivangi Joshi and Mohsin Khan, popularly called Kaira by their fans, of his popular show "Yeh Rishta Kya Kehlata Hai". And the show is going to have a tragic twist in the storyline as Shivangi's character Naira might die in the January 6 episode leaving Kartik alone. Though it is still a suspense whether Naira will come back or not, the ace producer has honoured his favourite on-screen jodi by calling January 6 as Kaira day.

And to announce that he organised a special event. While Mohsin and Shivangi took the centre stage and gave an impromptu dance performance, it was Rajan, Shivangi and Mohsin doing the signature SRK pose that got our attention. In fact, Rajan also shared how it started in Greece when the famous trio did it for the first time, and since then they have always done it before something big in the show.

Shivangi and Mohsin also shared their favourite Kaira moments and the former called their on-screen wedding sequence as her most favourite one. She said it is one of the best memories both on and off-screen.

The event was held at the "Yeh Rishta Kya Kehlata Hai" sets in Filmcity where the whole cast and crew of the show was present. Life-size cardboard cutouts of both Shivangi and Mohsin were installed at the venue and Rajan also got Kaira candies for everyone. The event was followed by cake-cutting to celebrate Kaira and also the beginning of 2021.

This event has definitely added to the curiosity of what's going to happen next in the show, but only time will reveal that. For now, keep watching "Yeh Rishta Kya Kehlata Hai" to know what happens next.