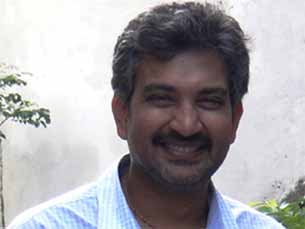 Ace filmmaker S.S Rajamouli, who is currently busy shooting Telugu magnum opus "Baahubali", Sunday shot the same scenes that were disrupted by rain last year. He hopes the weather works in favour of the film this time.

"Back on sets of 'Baahubali' and enjoying production breakfast after a long time. Shooting the same scene after a year as it was disrupted by rains last time. Re Erected the massive set. Hope the weather supports us this time. Happy Sunday guys (sic)," Rajamouli posted on his Facebook page Sunday.

"Baahubali" is one of the most anticipated Telugu films, which is expected to release in 2015. It features an ensemble cast of Prabhas Varma, Rana Daggubati, Anushka Shetty, Tamannah Bhatia, Ramya Krishnan and Sathyaraj in important roles.

It is also touted to be the most expensive Telugu film.