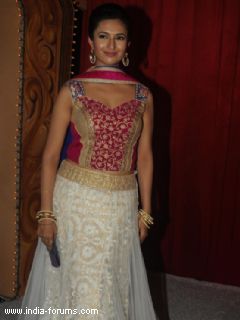 Recently the rains played spoil sport on the sets of Star Plus's Ye Hai Mohabbatein. Divyanka Tripathi who plays Ishita Raman Bhalla on the show was in for a rude shock when she found the ceiling of her green room leaking due to heavy showers. Divyanka who reported to the sets to shoot for a very crucial scene found her green room flooded and all the costumes for the show and her expensive make-up and laptop floating in the room.

Being a thorough professional Divyanka shifted her belongings to a safe area and changed into her get up so that the shoot is not disrupted.

"It was pouring the previous night as a result the ceiling gave away and started leaking. Since the door was locked-up and we had packed up no one realized that the room was flooded until the next day when I reported on the sets. My laptop, clothes for the shoot and other personal belongings were damaged. However, we were shooting for a very crucial scene and we couldn't afford to cancel the shoot, hence, I changed and resumed with the shots." said our very professional Divyanka Tripathi.

serendipity. 6 years ago Hope there wasnt much damage

isabella-2 6 years ago Divyanka Tripathi you are such an amazing actress & person!
Ye Hai Mohabbatein rocks

DivAn_IshRa 6 years ago Divyanka Tripathi you are such an amazing actress & person!
Ye Hai Mohabbatein rocks

Rohithbhargav19 6 years ago That's great divyanka... as you are so mature in the serial and out side of the serial... That's why I like you so much.