The film is about how a small theatre group saves the country and Mallika is the lead actress of the group. 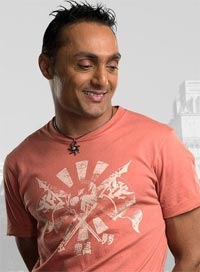 Featured Video
'I'm delighted by how good Mallika is at comedy. I play the guy who tries to get her attention right under her husband Paresh Rawal's nose,' Rahul, who gave a hit in 'Pyaar Ke Side Effects' with Mallika, told IANS.

In essence, brilliant actors like Paresh and Kay Kay are required to ham it up.

'The only thing that this theatre group can do effectively on stage is a rendition of K. Asif's film 'Mughall-e-Azam'. That's where my Salim act with Anarkali comes in. I'm only fantasising about being on stage with Mallika.'

But Mallika is keeping a low profile these days. According to sources, she is shattered by the box office performance of 'Ugly Aur Pagli' and has gone into a shell.

'Mallika had given the film her best shot, and was expecting it to be a glorious follow-up to 'Pyaar Ke Side Effects'. The poor show of the film has affected her. She's no longer that confident of her next release 'Maan Gaye Mughall-e-Azam'.'