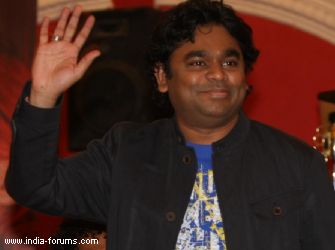 Oscar-winning composer A.R. Rahman is abroad for his 46th birthday, but he has thanked his fans across the world for their good wishes.

He turned 46 Friday. In a video link posted on his Twitter page, Rahman has said: 'Hi! This is A.R. and wishing you a very happy 2012. Thank you for all your wishes for my birthday. I won't be in Chennai this time, I am travelling abroad. So thank you for your kind wishes. God bless you all.'

The composer has good things to look forward in 2012. He has in his kitty several southern projects like 'Rana', 'Yohan: Adhyayam Ondru', 'Kochadaiyaan' and 'Pookkadai' as well as an untitled Hindi movie with Yash Chopra.

For now, he is upbeat about a five-city tour of Babelsberg, a German film orchestra, that will perform orchestral interpretations of Rahman's film compositions. The orchestra will be joined by choir members from Rahman's KM Conservatory.

The concert will start Jan 20 in Mumbai, followed by Delhi, Chennai, Kolkata and Bangalore.

Before Death, SP Balasubrahmanyam Has Sung For Upcoming ...
17 minutes ago

Sushant's Family Displeased With Attention Being Diverted ...
19 minutes ago

After Ten Months Jacqueline Fernandez has Finally Re-united ...
29 minutes ago

Kangana Slams Anushka for Raising her Voice Against ...
56 minutes ago