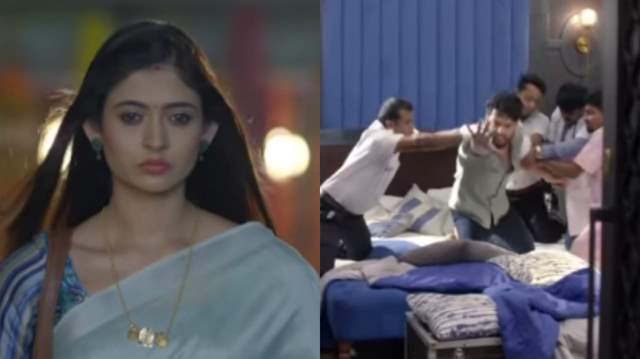 Star Plus show ‘Mehndi Hai Rachne Wali’ is not leaving any stone unturned to guarantee full entertainment with unexpected twist for the viewers. The current track of the show revolves around Pallavi getting to know about Raghav’s illegal business. The upcoming track of the show will leave the viewers shocked and surprised. The show recently witnessed a new entry of actress Snehal Waghmare who’s playing the character of a relentless cop in the show who is dedicated in exposing Raghav’s wrong doings.

The makers have just released new promo of the show which will surely leave the fans surprised with the upcoming track. As per the promo, Raghav and Pallavi will have a huge argument over Raghav’s way of earning money. Raghav states that money is the most important thing and it is because of his wealth that Pallavi is with her.

Furthermore, Pallavi is seen leading a middle-class life as she wears her simple cotton saree and minimal jewellery. Later, it is revealed that Raghav’s wealth and prosperity has been taken away from him and he is facing mental stability issues.

Raghav sees Pallavi and loses control over himself while the doctors inject him with medicines to calm him down. How will Pallavi take charge of the situation is something for the viewers to watch out for. Have a look at the promo:

While Pallavi played by actress Shivangi Khedkar has been brilliant with emotional scenes, Raghav played by Sai Ketan Rao’s aggressive avatar had received immense love. Looks like the actors have got a lot of scope in terms of performance in the upcoming track.

a day ago yes very excited. New twists give more potential to the actors to bring out their talent. SaiKetan and shivangi are already acing it and this will be more meat for them.All the best for the show