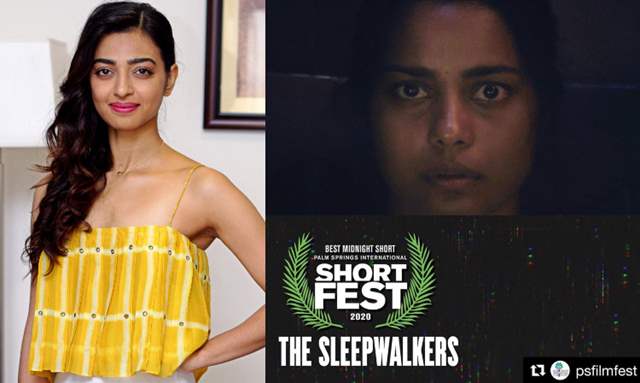 Radhika Apte, after delivering stellar performances as an actress has donned the director's hat. The actress released the trailer of her first short film titled 'Sleepwalkers' that received immense love and appreciation from all across. The audiences and friends from the industry have also appreciated the actress turned director for her donning the director's hat. A delightful moment for us all as her short film won an award at a prestigious film festival.

Palm Springs International Festival of Short Films was recently conducted online where the team announced Radhika's directorial debut a winner for 'The Best Midnight Short’ in the Midnight Short category. Just one film down and Radhika is already receiving awards as a director too which is highly praiseworthy.

The actress shared this extremely exciting news on her social media saying, "Thank you!! @psfilmfest ?? we are so thrilled to have won the Best Midnight Short at the Palm Spring Festival !!! #Repost @psfilmfest with @get_repost

The winner of the Best Midnight Short Award is…. “The Sleepwalkers”! Congratulations!"

Radhika Apte fans are super excited for the release of Raat Akeli Hai ...

Hina Khan shares that she felt like a baby working in Naagin ...
2 minutes ago

Varun Dhawan and Kiara Advani all set to star opposite each ...
12 minutes ago