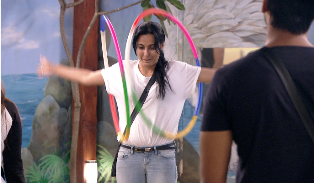 Only two weeks are left for the Bigg Boss Grand Finale and the competition has already gotten intense. With 8 contestants fighting it out for the finale, the true intentions of the contestants are coming to the forefront. In addition to the luxury budget task this week, Bigg Boss gives an opportunity to the contestants to secure a position in the show's Grand Finale with the Ticket to Finale' task.

The best of the previous tasks are re-introduced along with a set of pictures of every contestant.

They are further divided into two teams who would then compete against each other. Team A consists of Armaan Kohli, Tanisha Mukherjee, VJ Andy and Sangram Singh while Team B includes Kushal Tandon, Gauhar Khan, Kamya Punjabi and Ajaz Khan. At the end of the task, the winning team is given the power to knock out the weakest performer of the opposition team only if they have a valid justification.

The first task Samay Pe Pehra is launched, where the contestants are asked to keep a tab of every minute by manually counting it with the aid of the clock and announce the correct time at the end of every hour. The second one to be launched is the Shaitan Aur Farishte task, where both the teams have to steal medals of the opposition team while protecting theirs. Armaan's team wins the first and the second task and strike out two names that get dropped from the race of finale.

The third and the final task for the day is Kabhi Haa Kabhi Naa' where the both the teams are given an hour to order tasks for the opposition team to carry out. Each team gains points basis on the tasks they say yes to. After struggling through the previous tasks, Team B finally wins this task and knocks out a member from the opposition team.

Who will be that one lucky person who is destined to get the ticket to finale?

kalps888 7 years ago A MOST FAKE WRESTLERS I EVER HEARD---MORE THAN WWE.. IS SANGRAM [email protected]!!!!!!!!!!!!!!
I THINK IF SANGRAM GOES FOR EMPLOYMENT IN THE US FOR WWE OR TNA WRESTLING CHAMPIONSHIP, HE WILL BE THE WINNER OVER HERE.. NOT FOR WRESTLING BUT FOR HIS CHEATING AND LIE CAPABILITIES.. HE S GENIOUS AND MASTER TO THIS..
AND WHAT TO SAY ABOUT HIS PR?? WHO MAKES HIS FAKE DEGRESS AND FAKE WIKIPEDIA PAGES AND FAKE TAGS...
AWARDS TO THEM ALSOO...FOR THIER CONTRIBUTION IN MAKING THIS PARALYTIC.. NOT BY BODY BUT BY MIND..SANGRAM SINGH!!!!!!!!!!!

+ 3
7 years ago Love Kamya Punjabi.
She deserves to win

7 years ago for me kamya is the winner,.she played brilliantly..talked face to face,..she is one man army for me,.

7 years ago Kamya deserves to win. InshaAllah she will win.
Way to go Kammo :) Good luck.