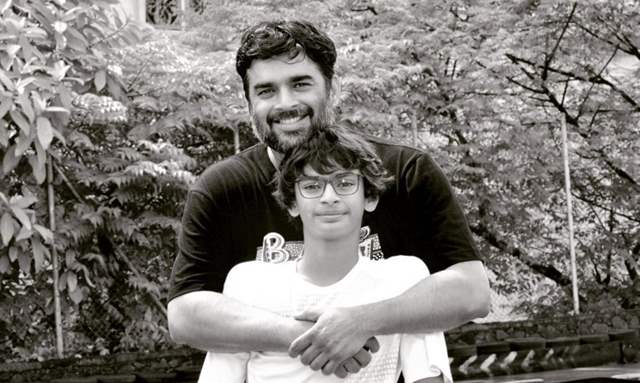 R. Madhavan’s handsome looks and pleasant persona has always attracted the fans. But now, like his father; son Vedaant has made it to the headlines with his latest achievement. The 14-year-old represented India at Asian Games 2019 along with three other boys. The young swimming champs participated in the 4x100m freestyle relay for group II. And guess what?

Vedaant won a silver medal for the country.

Like always the proud father captured the moment and shared the enjoyment with his fans. The 3 Idiots actor shared a photo of his beloved son Vedaant and his teammates wearing the silver medal on the dias. Sharing the photo, he wrote, "India gets her Silver medal at the Asian Games. Gods grace .. Vedaants first official medal representing India (sic)."

The 49-year-old actor has time and time again celebrated his sons achievements. Earlier, the actor shared a picture of his son winning a bronze medal for the country in an international swim meet in Thailand.

Vedant has been slowly climbing his way to the top and during his next match, the father hope he wins gold for India.

Madhavan had also celebrated Vedaant's first gold at a national championship like this: "Boy wins his first gold at the nationals for the 100 m free style... God grace and thank you all for your blessings. Proud, grateful and humbled."

On the work front, he will be next seen in Rocketry: The Nambi Effect, which is based on the life of former Indian Space Research Organisation (ISRO) scientist Nambi Narayanan.

The actor is best known for films such as Saala Khadoos, 3 Idiots, Rang De Basanti and the Tanu Weds Manu Manu series.

3 Idiots Becomes the Most Watched Movie Worldwide amid Lockdown even ...