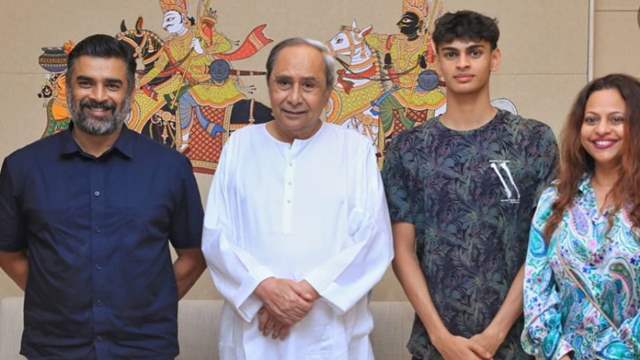 Bollywood actor R Madhavan has all the reasons to smile from ear to ear as his recently released film 'Rocketry: The Nambi Effect' has been performing well at the box office and also his son and ace swimmer Vedant who won the gold medal at the 48th Junior National Aquatic Championships, have put R Madhavan in a euphoric state.

Maddy's son set a record by surpassing the previous record holder's time of 16 minutes, his son also established a new one.

The actor posted a slew of images of his son and wife meeting Naveen Patnaik, the chief minister of Odisha, on Instagram on Thursday. They can be seen beaming for the camera in the photographs. The CM is also seen felicitating Vedaant with a blue jersey.

"Such a pleasure to meet with honorable CM & very dynamic Shri @Naveen_Odisha Ji.Thank you so much for the kind hospitality & the most fantastic endeavor of putting Odisha firmly on one of the Best Sports Venue map of India-Your commitment for the future of sports is invigorating."

Soon after he shared the post, his friends from the industry were seen congratulating his son. Shilpa Shetty commented, "So proud of Vedaant♥️🧿♥️".

Fans also showered their love on the post, one of the fans wrote "Congratulations to Vedanth and the proud parents!! India is equally proud! ❤️"Another fan wrote, "Best example of how a actual star would be.. grt maddy."

Meanwhile, Madhavan recently celebrated the success of his film with Nambi Narayanan and his family. They had a low-key celebration at home.