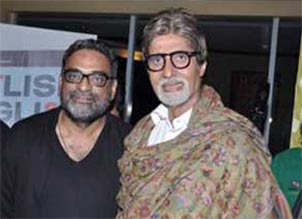 Director R. Balakrishnan, fondly called Balki, has been busy filming his new project starring Amitabh Bachchan, but it is only now that he has revealed the title of the film - "Shamitabh". Interestingly, it sounds similar to the Bollywood megastar's name.

"We are happy to announce that the film is titled 'Shamitabh'. As in SH before Amitabh. We are half way through the shoot of the film, so will finish and talk more about it.

"Right now, I'm enjoying watching the lethal combo of the intensity of Amitabh Bachchan, the intelligence of Dhanush and the innocence of Akshara in action daily," Balki said in a statement.

The two had also worked together in films like "Cheeni Kum" and "Paa" so, it comes as no surprise that the film's title has similarity with the actor's name.