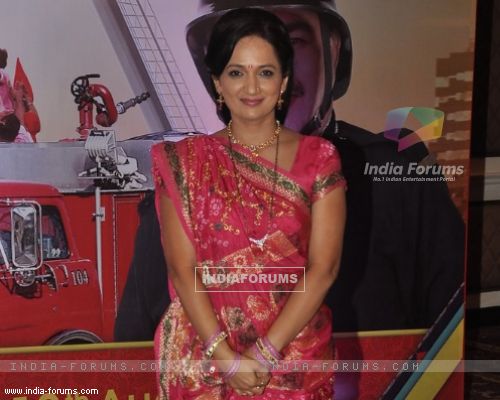 Kavita Laad, a well known and a much appreciated face of Marathi theatre and cinema makes a debut in a Hindi show Chandrakant Chiplunkar Seedi Bambawala. The show will go on air from today, August 18. We have with us Kavita speaking about her character in the show, her chemistry with Prashant Damle, how different it is to work for a Hindi show as compared to a Marathi GEC in this exclusive chat. Read on!

I am playing Hemali Chiplunkar, wife of Chandrakant Chiplunkarand she is extremely proud of this fact. She comes from a Gujarati family and gets married into a Maharashtrian family. She is a very good bahu and surprisingly gets along very well with her mother-in-law. Instead of nokh jhok between saas-bahu, everyone will get to see nokh jhok between me and my father Hasmukh Mehta (essayed by Anang Desai) who believes that I could have done better in life rather than marrying Chandrakant Chiplunkar. I am trying to strike a balance between my father because I love him as much as I love my husband.

Tell us something about the show...

As we know, SAB TV always wants people to laugh. Chandrakant Chiplunkar Seedi Bambawala is a kind of show where you can sit back and enjoy with your entire family. The show has a very innocent comedy and humor. People will definitely relate to the show and love the entire concept based on fireman.

As it is known to everyone that the show is produced by Dharmesh Mehta who is also associated to Taarak Mehta Ka Ooltah Chashmah and it also has the concept of colony. How different or similar will this show be as compared to Taarak Mehta?

Yes, there is the concept colony like Taarka Mehta and you will find some kind of similarities as well. But the situation on which the humor is based is definitely different. Here, we are talking about Seedi Bambawala (fireman) and his family and what all situations they will face.

You have worked with Prashant Damle for many Marathi shows and drama. You are yet again back with him. Do you think it is a kind of advantage for your show?

I have worked with Prashant for a very long time. I have done two plays with him which were extremely successful. We share a great chemistry with us and I am sure our chemistry will reflect on screen as well. Moreover, we understand each other very well. Not only with Prashant, is it also rest of the team. You need to have a great team to give an amazing performance.

This is your debut in main stream Hindi show. How is the entire feeling?

I have done a Hindi show long time back around sixteen to eighteen years ago. But yes, this is my first show where I have a prominent character to portray. As an actor I am in this profession for last 20 years so I know the technique and how things are done. Now, after so many years, there is something new. Considering my character, I want to learn a little bit of Gujarati, the leheza of Hindi. The number of scenes that are done per day in Marathi shows are different than what are done for Hindi serials. The working style, the techniques are different. It is a learning process and I am enjoying it.

How different it is working for a Hindi GEC than a Marathi GEC?

Firstly, it is the language and secondly it is about how many people you approach. Marathi being a regional, of course there are limitations in the budget and stuff like that. On the contrary, in Hindi everything is done on a larger scale. In Marathi, we used to shoot only for one camera set up but for Hindi shows, there are two camera set ups. That is something to look forward which is really fresh and new to me.

TellyBuzz wishes all the luck to Kavita Laad for her show Chandrakant Chiplunkar Seedi Bambawal!