View Profile
It is deja vu time for Tusshar Kapoor.

When KYA KOOL HAI HUM had released a few years back, there were strong words reserved for the film with critics ripping it apart. However, the sex-comedy went on to be one of the biggest hits of the year and got both Tusshar and Ritiesh a lot of acclaim for their comic timing. Audience, especially youth, loved the film and flocked theaters in dozens. 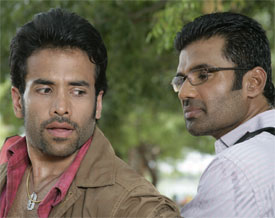 Featured Video
reviews all over, but is gaining popularity with word of mouth. Laughs Tusshar, "Compared to KYA KOOL HAIN HUM, I guess reviews are still a little better for ONE TWO THREE. Of course, it was surprising to see the way the film was being criticized by some section of the media. However, the film sustained well by the time Friday came to a close since people who were coming out of the theaters weren't quite complaining."

Ask him if he sees the film going the same way as ONE TWO THREE commercially as well and he replies, "Let the film's collections for the entire week come out and then we will know. It is too early to make statements. However, I am quite sure that the word of mouth is pretty much helping the film. Youth has been patronizing the film in a big way. We have seen the way Saturday and Sunday have performed. The film has only gained from strength to strength with the collections showing steady escalation. I am certainly happy with the way the film has been performing."

ONE TWO THREE is Tusshar's first comedy this year. In the coming months, he has at the least three more films lined up for release, each of which belongs to comedy genre. Next to come is his home production C KKOMPANY followed by sequel to his 2006 hit GOLMAAL i.e. GOLMAAL RETURNS'. Last but not the least, there is also DO LUCKY where he pairs up with Govinda for the first time ever.

Smiles Tusshar, "It wasn't a conscious decision to sign only comedies. However, I have also signed the next production of Abbas Mustan, which is a family outing. Then there is Apoorva Lakhia's action film on which work would begin once he is through MISSION ISTANBUL. 2009 would see me in much varied roles."-(SAMPURN)