Always jovial off-screen, Arbaaz Khan turned angry while attending a press conference for his upcoming film Woodstock Villa. The actor, the brother of a troubled Bollywood star and the husband of a sexy Bolly-babe, Arbaaz, clarifies his controversially good married life, shares bits of Salman’s entry into television and of course, has more to say about his appearance in his upcoming flick Woodstock Villa…

Q. Please brief us the story of Woodstock Villa.
A. It is a Hansal Mehta film about swiftly changing moralities in today's world. After the disappearance of a successful businessman's stunning wife, hostile and taunting ransom demands follow. As the true nature of stakes for the captor and his captives unfold, Woodstock Villa lithely transforms from a precise neo noir into a chilling and shocking thriller, and ultimately into a vivid, invigorating, icy masterpiece of murder, mystery and suspense. Neither pleading eyes nor bound wrists nor a shallow grave are what they seem, as a moment of relief is suddenly transformed into a web of deceit, and a moment of truth is followed by a sudden web of lies. Unsettling, thrilling, hallucinatory, suspenseful and erotic, Woodstock Villa is contemporary entertainment that breaks new ground with every twist. 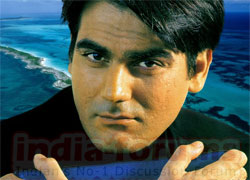 Q. Tell us about your character in the film.
A. Well, the character's name is Shrin who is a businessman and loves his wife. There are incidents and moments in the film which brings out certain amount of frustration out of this character due to blackmail, lust, adultery, ransom and a lot of elements involved in his life which are very complicated. You can call the film a dark thriller.

Q. How was it working with Sikandar Kher and Neha Oberoi?
A. They are new and fresh in this industry and are very talented, too. It was good working with them because you rarely get to see such confident, talented and prepared actors in their first films. There was never a moment when I could feel that they were struggling with what they wanted to do. They are wonderful.

Q. Please share your experience working with the director Hansal Mehta…
A. Oh! He is very clear, dedicated and focused director. There wasn’t any problem working with him because he is always ready with solutions. He is very expressive, too. He is the guy who would narrate to you what he expects from the character. He is very dedicated and will not compromise with anything, even if he has to shoot a single scene for the whole day. He does not care about anything but good work.

Q. What is the USP of Woodstock Villa?
A. The fragmentation in the story and the relationship that has been shown in the screenplay, in terms of styling, techniques and presentation, is very different. All I can say is that, it's a very interesting film.

Q. What do you have to say on the controversies that rumored across media regarding the split between you and your wife Mallaika Arora?
A. I don't know from where did it all started. Neither I nor Malaika said anything regarding this. Actually, we were launching a product which had a tag-line, ‘because of the use of the product husband again falls in love with his wife and he proposes her to re-marry her’. It served as a spice for the media persons and this became news that Arbaaz is getting re-married. I don't have a clue about it and later, media declared about it to be a publicity stunt. Why would we do so for publicity? Rather being from a filmy family we would have run away from media if we, in fact, had any problems.

Q. Can we hope to see you and Mallaika together in a full fledged film?
A. As of now, we are not into any such thing. But yes, she has an item number in a film where I, too, have a role to play.

Q. Do you think that Salman Khan will be able to give a good competition to Shah Rukh Khan on television?
A. I don't know about it at all because neither Salman nor Shah Rukh will think of all these. They do everything in their own style and never try to do something over one another. For Salman, it is a new thing and we hope he does it well as you all know that Salman leaves his mark in everything he does, so will he here, also. There will be mistakes, fun etc. and at the end of the day it is Salman all over.

Q. The other projects you are working in?
A. I am acting in Bobby Gupta’s Stoneman, Madhur Bhandarkar’s Fashion and in a Sohail Khan Production film Kissan. Sabir Rahman