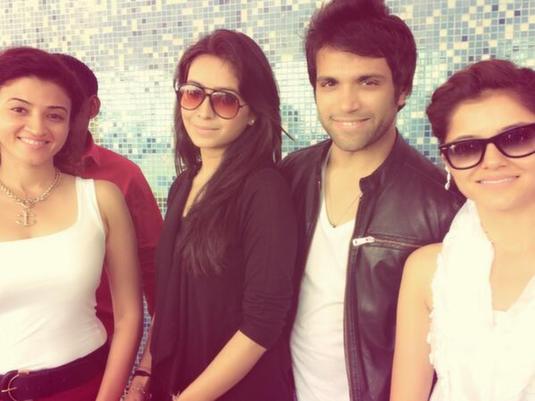 Actors  Rithvik Dhanjani and Asha Negi who recently won Nach Baliye season 6 have been loved by the audiences and have been traveling the world for quite some shows lately.  Recently when they were in New York and Gayana, we hear that the actors ran into some unprofessional behavior by the event's organizers.

The couple was accompanied with Suhasi Dhami who was seen as the contestant in Nach Baliye 5 and Rubina Dilaik who is seen in Jeannie aur Juju. We hear that the actors were not treated well and in fact not paid their dues as well.  When we contacted Rithvik he said, "There is a man named Kumar Saxena who works for an event company named Christene and Pop Entertainment. He offered us to do 4 shows - 1 in New York and 3 in Gayana. As we have been doing shows for a long time, we usually make sure that we get 50% advance and 50% few hours before our performance.  Mr. Kumar told us on the phone that he is elderly and is not able to give us an advance but he would pay us as soon as we reach New York.  We also agreed hearing that he is elderly and since we respect elders.  When we reached there, we were ill treated and we got the worst treatment of our lives.  We were not given any vehicle to travel when we were there nor a daily allowance.  Luckily, we have a few friends in New York who came in to help us."

He further adds, "We were not provided any rehearsal hall, no music system, no choreographers nothing for our acts. We were allotted a shop to practice. We used to practice in a shop after 10 when the owner used to close the shop.  The manager and client would call their friends and family members to show that they have called celebrities, which would be a nuisance during reharshals.  Then we did the show and when it came to solving the issue, they did not pay us and told us that we will only be able to pay you after we seel our show tickets for the upcoming shows in Gayana."

The actor says that they denied going to Gayana but the clients promised them that they would get their full amount there.  Hence they agreed to do the remaining three shows there.  Rithvik continues saying, "The client gave us the entire money for the first show after our first performrance in Gayana.  Mr. Kumar had been getting a huge cut but he wasn't given anything for that show.  I found this a little weird.  The next show we did, the client gave us a percentage of our money and when we negotiated, they did not say anything."

Furthermore he says, "We then decided not to do the third show.  In fact we tweeted about it which created a huge buzz.  Our fans started bashing them and in fact the matter went to the police because of which they started threatening us that if we don't remove the tweets, they would cancel our return tickets to India.  We had no option as we were in an alien country so we removed the tweets.  However, as soon as we reached India we did tweet about it again  so that we could spread the news and help other actors from getting conned by these people."

"Those people also gave their statement that we were acting pricey but I have all the proof and even the copy of the contract. And I am sure my fans know me and they trust me," he concludes.

Wow what a horrific travel tale the actors had!

beauty.rubi 6 years ago all the best Rubina Dilaik for ur future projects.and get well soon dear.take care.

sakshik 6 years ago hope Rithvik Dhanjani & Asha Negi others never come across with such frauds!!
better luck for the future projects..

ashfaque2012 6 years ago Asha negi & Rithvik Dhanjani when will both U concert at foreign Country then check promoter reality & then doing visit. A;; the best.

sakshik 6 years ago so sad you guys have to come across with such experience... Rithvik Dhanjani & Asha Negi you are best celebrities who even care for other actors in that condition too !!

masumasrilanka 6 years ago Rubina Dilaik happy you returnera home safe ly. But how r u de to treat you all badly,

ukgal62 6 years ago Disgusting!... Very disappointing to hear these wonderful people had to go thru this awful experience! No wonder they're gonna say 'no place like home, India is the best'... Glad they made it back home safe and sound... :)