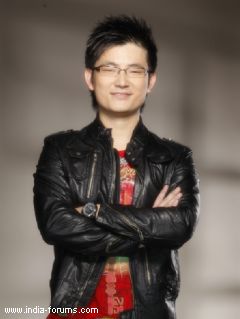 Chang who will be seen hosting the show, is quite excited about hosting the show. Talking about the show and his hosting experience, Chang told us, "This show is basically about the love stories which can go wrong. In love, something happens which is sometimes not morally right. Sometimes we feel that everything done in love is fair but we are not always right and sometimes we do something which is incorrect and which makes things go wrong."

"We have already started shooting for the show and it's a good fun to host the show. I will be narrating the stories in the show. The fiction stories which will be shown in the episodes of the show have been presented very nicely," adds Chang.

Apart from being a talented singer, Chang has also shown his perfection in hosting and acting which made us wonder what is Chang's first love. Speaking on the same, Chang avers, "I love acting the most and singing and hosting come along with that."

Currently, Chang is busy with a wedding event which is happening in Ambey Valley. Chang has been invited as a guest to perform there in the wedding. Chang shared with us, "It's a 3 days wedding event where I will be performing on some popular dance numbers. There is going to be so many events like pool side party, rain dance, etc. going to happen in the event so it's going to be so much fun out there."

We also quizzed Chang about his upcoming projects. He told, "I have just finished doing a film but I can't divulge any details about it now. The movie is expected to be released by the year 2015."

+ 2
7 years ago Wishing the best for the show to Meiyang Chang. Waiting to see him along with Surbhi Jyoti on the show!

7 years ago SURBHI IS ALSO HOSTING DA SHOW FOR UR INFO!!!

+ 3
10 years ago you should listen to the songs from love u mr kalakaar...some real good tunes in it!!

+ 2
10 years ago YUN HI from tanu manu
CHARACTER DHEELA from ready
TUM HO MERA PYAAR from haunted
TUGHE BHULA DIYA from anjana anjani
AND MITWA forver for my robbie-kasturi
I LUV CHAR BAJ GAYE...most from these

10 years ago Readdy's songs plz? becoz they are always famous in the masses :)

+ 6
10 years ago I Like Saibo & LOVEEE Tum Ho Mera Pyaar From Haunted, BOTH Should Be Included Seriously :)

+ 5
10 years ago most of the songs are good..
but im kinda pakaoed of Party Abhi Baaki hai..
Saibo is awesum..
luv ka the end has good songs too!
dhinka chika and character deela are awesum!