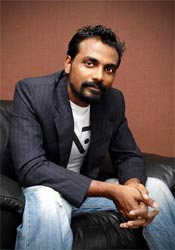 Here, Remo talks of dancing in India, his part in giving a tribute to Michael Jackson and how this country is in serious need of actors who know to shake a leg!

How does it feel with your foot wrapped in such a classy cast?
Oh! I am enjoying it! I love wearing expensive stuff. I am fond of designer shoes and I feel this is a unique one that I got a chance to slip in. But it's so pricey that I can only afford one. I just love the way it looks. This will come out in another two weeks.

With the cast on, how do you rehearse?
Sometimes I go to the rehearsal hall and try to practice whatever I can do. But then I am asked by the contestants and my team to just relax and let my leg heal.

Are you upset you're not able to dance?
I am definitely a little upset but to tell you the fact, I was shooting the very next day of the accident. When I came back I was doing everything the way I did before I met with the accident. So this doesn't affect me as I have seen people dancing without legs. Yes, it is true that an accident like this is a nightmare of sorts to a choreographer and a true dancer but whatever is destined would happen and I can't blame anyone for the incident.

The competition will be tougher now as your co-judges will set their standards to an even higher level, especially because you won the last season. Is it an advantage or a disadvantage?
It is both. Advantage is that I have already won and made one dancing star in the Season One and I am fully charged up and the disadvantage is that people would try their best not to let me win this time. But I have made sure I give them an even tougher competition this season and win many seasons to come.

Terrence has learned new dance forms for the competition...
Well, he has to because he has to defeat me(laughs). So it's good for him that he is learning new dance forms. But honestly, it's always good to learn new forms as you can entertain the audience with new styles.

What would we get to see new from Remo ke rangeele?
You will see more of Indian style dance forms from my end this season.

Which is the biggest learning curve you picked up from season one?
The biggest lesson I have learned is top push the limit of my creativity. I always felt I have done my best with a song but on DID when I thought I have delivered the best through my contestant, some other contestant from the rival camp would shake me up to realize that people can always do much better. So, I have realized that the best for me wouldn't be the same for the world.

Nation chose Salman as its dancing star and now we hear that he is all set to for Bollywood rather than sticking to dance alone. Isn't it deviating from the true aim of the show?
See if there was any other participant for example Jai Kumar Nair who is a fabulous dancer with technical finesse, I would have felt bad had he deviated from dance. But talk about Salman who has a great body, good looks, well-spoken and equally skilled at dancing, then why not acting. He looks so good so it would be wrong on my part to ask him to turn into a choreographer and drop the prospect of turning into an actor.

So you mean choreographers aren't good-looking?
As it is there is a dearth of actors who can dance well barring Hrithik Roshan, Shahid Kapur and Ranbir Kapoor. We can count them on fingers so Salman would be an addition on the list.

You are choreographing for an international project?
Yes, I am. I am doing two international projects, one is a musical opera and for that we would be travelling across the globe. I have absorbed all the participants from the Season One and Two of DID. The second one is Jermaine Jackson's tribute to brother MJ which will take place at Wembley stadium. He has taken dancers from different parts of the world and I will be representing India. This is like a dream come true for me (smiles).

+ 2
12 years ago Well all the best...last season Indian dance was his minus so hope he can fulfill it this time...

12 years ago get well soon.all the best and god bless you

jaanumerijaan 12 years ago I knew he wasn't just a bad guy. He's a really humble and nice to other people aswell.

+ 2
12 years ago all the best to remo...so looking forward to this season DID...its already rocking