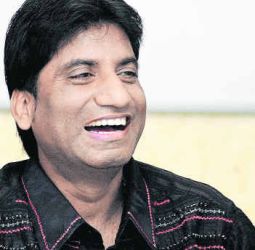 Comedy is the best genre which acts like a medicine for the audience. Indian comedy shows like Comedy Nights with Kapil, The Great Indian Laughter Challenge and many more have created a particular standard for comedy.

These shows have given a platform to a few stand up comedians who are now riding high with their popularity and success. Faces like Kapil Sharma, Sudesh Lahiri, Raju Shrivastav etc. are making people laugh with their rib tickling gags.

Raju Shrivastav who has also acted in a couple of films garnered fame through the comedy show The Great Indian Laughter Challenge on Star One.

We got in touch with Raju to know more about the field of comedy and more...

When asked Raju about the standard which he has set for comedy he says,  "I sincerely do my work. I don't think about the results but yes I focus on my work. I always keep a check that my comedy does not contain vulgarity or it does not hurt anyone and I think that's the reason everyone is appreciating my work."

Talking about his future plans he says, "I will soon grab something interesting in future, now I am doing live shows."