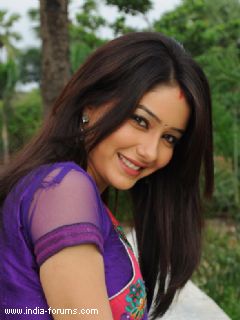 Leena Jumani rose to fame with Imagine's show Bandini but these days the actress has limited her appearance on television. After her stint with Ajay Devgn in Himmatwala, Leena is all set for an episodic for UTV Bindass series of Halla Bol.

On being asked Leena about what appealed her the most for an episodic in Halla Bol she says, "I liked the story and thus did this episodic. It's going to be all about casting couch. I am really looking forward for this as I enjoyed myself while shooting for the show."

Elaborating on the story line, she says, "I play a girl who is struggling to become an actor. What all she has to go through in this process is the story line. One has to watch this to understand it better. I can't divulge much."

Leena is very much attached television and hence she is keen on working in TV but is not ready to accept a character that lasts for a shorter period of time, "I would never leave TV at all as it has given me my name and fame. To be frank enough I don't want to do a show where my role will be for 3 to 4 months. I want to do a full-fledged show or a character. So let's see what is in for me in small screen."

Right now Leena wants to focus on the films and says that she is willing to do shows if any good opportunity comes her way, "It's not a conscious decision but I'm waiting for a good role to come my way. I do get offers but nothing that excites me. Thus I'm busy with my films. I have completed the shoot for 'Kshan' and may be by September this year will start with new film Collage Days. Both the films have new comers," says Leena.

We wish Leena all the very best for Halla Bol

Aadaa 6 years ago Leena exudes sensuality and sexuality from every pore of her gorgeous body, and to top it, she is extremely versatile actor, her acting is so natural that one doesn't get a feeling that she is acting, any character she plays comes over as a believable person!
#
I am hoping she will come more often on the TV..

Anyone know which episode of ishq kills leena will be in