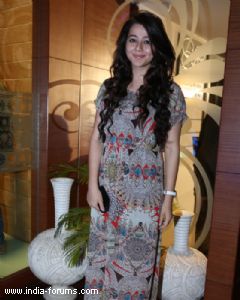 Priyal Gor who is currently seen in Ek Boond Ishq in a cameo role of Radha is all set for her big screen innings. Even though the actress has already made her debut on the silver screen with a Punjabi film titled as Just U and Me, she has another Southern film in her kitty.

We had earlier reported that the lovely young actress will be seen debuting on the big screen in a Punjabi film. To shoot for the movie Priyal had committed her dates to the film and was also shooting for the same in Chandigarh. The film Just U and Me, released on 6th December and managed to get an okay response for the Film. However, having made her way into the film line the actress now looks forward to act in regional films and has thus signed a South film.

Talking about the film, Priyal says, "Yes I'm doing a South Indian film. It's a good offer and I couldn't resist it. I'll be in South from 23 January and I am all geared up for the first shooting schedule of the film."

The actress completely refused to divulge any more details of the film, "I cannot talk about the details of the film as of now as it's too early to say anything. All I can confirm is that it's going to be a Telugu film and the base of the story is that of a Hindu girl and a Muslim boy."

When asked Priyal about her stint in the ongoing show Ek Boond Ishq, she says, "Actually I went to the production house and told them the offer for the film. I also said that I will have to leave the show as I've to give my first ten days of the month to my film, so it would be difficult to cope up with a daily soap schedule. The production team was very co-operative and tried to adjust my dates and told me to continue with the show."

Priyal states the reason of why is she not leaving the film and how the offer has appealed to her more than the money aspect, "I couldn't leave the South film as well because they had already paid me in advance. Also leaving aside the money part, it is a good offer learning wise as well for me so I didn't want to leave it at any cost."

When it comes to acting in a Southern film Priyal says the language doesn't become a barrier as there are people to help and guide you, "I don't language is an issue as think these days things are made very easy for actors. Also the production team and my director help me so I'm not worried about that," she concludes.


We wish Priyal good luck for her South film!
0 Likes

Badtameez_Dil 6 years ago TB if Ur Love For Priyal got less ..
Can we have Some articles related to people who in real Belong to the EK BOOND ISHQ show the leads r Viraf -Chhavi..

mastaTmohi 6 years ago Ek boond ishq
Will work its charm on u from the very first episode and will continue to keep you hooked!! A must for everyone!

Shaina_b 6 years ago As long as there is no love track between her and MJ!!!!!

Saimaa.H 6 years ago all the best for your movie priyal

ek boond ishq is the bestest show on tv!!