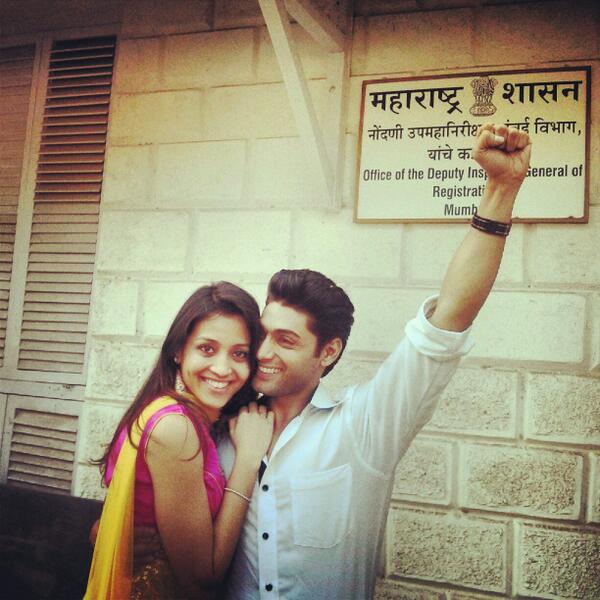 Ruslaan has just got married to his beloved Saachiji (Sangeeta Ghosh) in Sony TV's Kehta Hai Dil... Jee Le Zara and now is real life even as you are reading this he has just finished the proceedings of a court marriage and is ready for a new phase in his life with his real life partner Nirali Mehta.
He sounds nothing but happy to the core in his very many tweets as he announces since early today morning that he will be going off to his own real shaadi directly from the sets! His tweets since morning read - "So I'm going to go straight from my shoot to my wedding. Used to hear abt this happening now I'm experiencing it. Welcome to tv dude." "Finally packed up n going in my jeelezara costume for my shaadi. Have to make it at 11. Going to be late for my own shaadi man." And one with a pic of him and Nirali outside the Marriage court, addressing to Nirali "New chapter of our life starts today. Main tera hero @NiraliRM.
We had spoken to Ruslaan some days back when he had told us that he has special plans for Valentine and he sure had grand plans as he decided to have his wedding today. Since Ruslaan has just got over a grand wedding in the show, he didn't want a typical shaadi in real life so he will have a court marriage today followed by a traditional wedding on 2nd of March which is supposed to be a close family and friends affair in traditional Gujarati style as per Nirali's wishes and since the couple plan to leave for their honeymoon to Maldives immediately after there is no reception.
While talking to us Ruslaan remembered how he had met Nirali, "We met when we were together at Shaimak's Dance Academy around 9 years back. Nirali was the best dancer in the group while I was the worst so Shaimak had told her that she will have to teach me how to dance which is when we got close as we danced on romantic numbers and taught me steps. There was some attraction, some love, some friendship which we shared but then we went our separate ways - she went on to her studies while I pursued acting. We were in our own different worlds but finally I realized that we might be professionally very different with varied personalities but she was the one for me."
Once they were together there was no stopping Ruslaan as he acknowledged his love for her and says that it made him turn into a romantic too. "Amongst the two I am more romantic since I feel that guys should be more romantic and try to impress the girl whereas the girl should sit back and enjoy all the wooing." Lucky Nirali who gets to enjoy romantic things with Ruslaan time again. 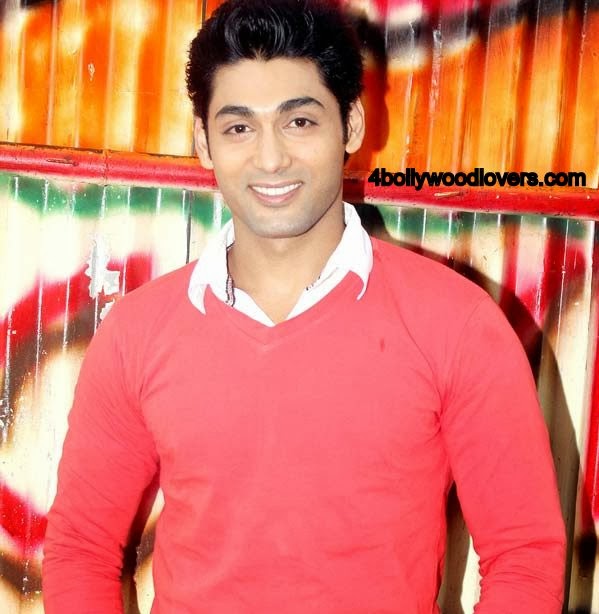 Amongst all the things that Ruslaan has done for Nirali the one he remembered vividly was the time he sang for her, "The most romantic thing I have done for Nirali is that I have sung songs for her. I don't know whether she felt it was most romantic or not but according to me that was it. I am not a singer but one day I told her to come home in the evening for a party I had arranged but in reality there was no such party, and even my parents were not at home. I made her sit and started singing songs one after the other with my casio machine for company. After singing 7 - 8 songs in all I asked her to join me in singing but she refused."
He did not have to jog his memory much when asked about more details and said, "My first song I remember was Main Koi Aisa Geet Gaoon followed by Main Shayar toh nahi and many other romantic numbers. She was surprised and shocked that someone was actually singing for her in typical Hindi film style but then I guess she was impressed till the third song after which she started thinking yeh kitna aur gaayega? After 7 - 8 songs I saw her yawning and she was probably feeling sleepy so I stopped. But it was fun for me!" said the happy go lucky boy who will be a married man from today.
At that time Ruslaan had also mentioned that with the shoot of his wedding he was getting practice for his real life marriage. "Even as I am all decked up as a dulha on the sets I have no time to plan my own wedding in real life... but this has become like a rehearsal for me."
We could not resist asking if just like DV in Jee Le Zara he had ever fallen in love with a girl elder to him? "Not seriously but I remember when I was in my 9th Std., I had a crush on my Chemistry teacher Miss Blossom. It must be because of her name since as a child I found it to be a very interesting name and the teacher was sweet too."
Well, now all that bachelor talk is old news as he rings in the new and steps into a new episode of his life with Nirali.
We wish the couple a blissful and happy married life ahead!
Seema Khot Mattoo

+ 2
7 years ago Hope this new chapter becomes the lasting phase of eternal bliss for you two. May God bless you with long, romantic, prosperous, healthy and joyful life. Congrats to ruslan and nirali. Bst of luck cute luv birds!

+ 5
7 years ago god bless them both :) have a happy married life

+ 3
7 years ago congratz to ruslaan and nirali

humak 7 years ago Congratulations Rusllan for wedding good wishes to you .yr best

7 years ago Once again congrats ruslaan
love u

+ 2
7 years ago Ruslaan is the best thing happened to TV industry.