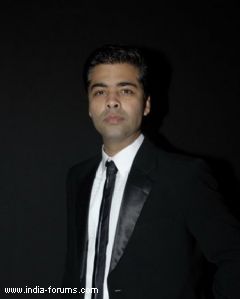 After giving an immense popularity across the country to the young Salsa dancers Sonali Majumdar and Sumanth, the stage is set for Colors' popular reality show India's Got Talent which is back again with a bang with some amazing new talents but with the same set of judges Karan Johar, Malaika Arora Khan and Kirron Kher.

We spoke to Karan to know more about his association with the show as a judge and his views about the kind of platform India's Got Talent is providing for the talented people of India.

Taking about his association with the show Karan says, "I am quite excited about the show. The show is very enlightening. I didn't realize that there is this extent of talent which runs through the country. Over and above the talent, its human story behind each and every contestant, the kind of journey they have gone through before reaching this platform. Some of them have gone through such hardships of life which can't be expressed in words as what kind of life they have lived and what kind of obstacles they have faced to reach here. Their stories will just open your eyes. We are so cocooned, we live in this urban atmosphere, we don't know what's happening in the heartland of the country and have no idea there is a level of passion which exists across the country."

Karan feels that, India's Got Talent is an emotional show where contestants' stories touch ones heart apart from the kind of talent people have within themselves as he shares, "It becomes very difficult to control your emotions sometimes. Many times it happens that some contestants try to gain sympathy by telling their stories but there was a girl who had lost her leg in an accident but still she was smiling all the while with a positive spirit. So, seeing her happiness, I got tears in my eyes. IGT is an emotional show which touches one's heart which not only entertains you but also shows an emotional journey and you feel a part of their family or life and you feel like contributing to their life by voting for them."

As the show also aims at giving recognition to the people who hail from smaller towns and cities, Karan says that through this show people appreciate and recognize the contestants immediately, "We are not aware of the opportunities that are provided to them in their state or town. A lot of them had gone far beyond in life because of their presence in the show. Shonali and Sumanth are now national celebrities rather than being local celebrities and they are known everywhere. Not only the winners of IGT but even the runner ups and the contestants who made their way to finales, are performing everywhere. It feels wonderful that we judged them and made them reach to the finales. Talent always lasts forever and IGT gives such talented people a platform."

Well said Karan, India's Got Talent is indeed a good platform to showcase the ability for the viewers!!

Shalma789 9 years ago Why does Salman keep launching new girls? I mean, if ur going to lauch someone, do it so that the audience loves the character and person. What happened to kites, Barbara Mori's film did great in Aerica but not India because the Indian crowd wasn't interested in the character and plot unlike in America where its more sensual.

Do u really think a foreigner is going to appeal to the audience? I hope she is a hard wroker though because she's about to take the ride of her life with Salman Khan.

One more question: Why doesn't he get married and have kids who are going to carry off his genes, i mean just think about it, Salman's son might be hot. He might even have a baeutiful daughter. Looke at Ranbir and Kajol who have parents in the movie industry and of course there are more.
Does he plan to have kids when his 50...please noooo.
But i still love Salman because i love watching all his old movies and his smoothness and understanding of every character.

ObodroKargosh 9 years ago Salman is the only hero who launches new talent in all his movies! i love him for that

i hope she does well...i love Partner and would love to watch Partner 2 but i hope she's good =]

tulipbaby53 9 years ago I hope this doesn't sound racist because I don't mean it in that way: Another foreign girl in Bollywood!

sweet_angel27 9 years ago I like the fact that Salman likes to launch new talent, but I hope this girl can act, and I wish he found a girl from India nevertheless looking forward to this movie.

aewa 9 years ago OK, I agree that the girl is hot but still... Are you seriously trying to tell me that India is lacking pretty talented girls??!?!?!? I don't think so! Why waste money and resources trying to teach this girl how to speak hindi from scratch when there are so many deserving Indian girls that would DIE for this opportunity

Ashalata Wabgaokar passes away due to COVID-19
20 minutes ago

Zarina Wahab was Tested Positive for COVID-19; Actress ...
30 minutes ago