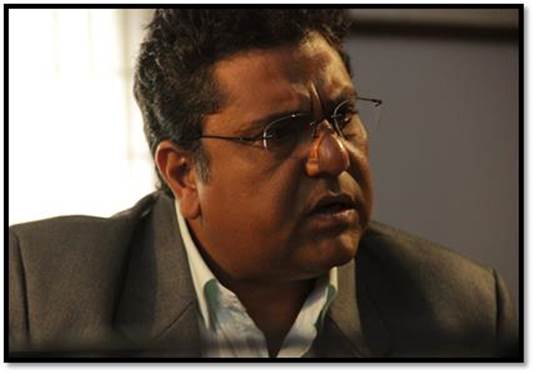 Zakir Hussain who will be seen sharing screen space with legendary actor Amitabh Bachchan in Sony TV's Yudh talks about working with Big B, his character and more...

Tell us about your character Anand Upadhya, in Yudh?

Anand Upadhya is the right hand man of Yudhishthir Sikarwar (Amitabh Bachchan). The show is about an elite businessman Yudhishthir Sikarwar, caught in psychological, emotional and professional battle. It is Amitabh and me who handle the business empire. I give him solutions and suggestions to handle the company. My personality, like Anand, is calm and composed and I don't usually display overwhelming emotions.

How did you get this role?

Anurag and I are friends since long time now. He has been associated with his actors throughout and has ended up making a team with great cinematic sense. Anurag can spot his characters easily among actors. Due to his innate quality he just happens to know what person he wants to cast and how.

One day in a very candid manner Anurag told me that I simply have to be whoever I am as a person and the character will automatically flow out. Some parts of Anand's character are also modeled of my own personality. I developed my own sense of acting and equipped myself with skills required to run the show. I've eventually learn't to develop a character. One must know how to perform three essentials, that is, banaana, sajaana and savaarna.

How is this role different from your past roles?

Anand precedes any circumstance thoughtfully. The calm and composed demeanor of my character makes him a man of a remarkable sharp mind. Compared to my other roles, this man is very circumspect and takes decisions in a very calculative manner. I just cannot step out of the qualities of my character, the moment I do, it dies out. Anand is very difficult to play but at the same time very exciting.

How was it to work with the megastar Amitabh Bachchan?

Till now I have faced no difficulty in working with any of the veteran actors. I have shed my inhibitions with time. Our concentration as a team has always been in making a scene better. Amitabh only helps people come out of their restricted mindset. He sometimes ends up suggesting new things and ways to bring out a character trait. He helps young actors overcome their problems. Sharing screen with big actors like Amitabh boosts my confidence. He is a far-sighted man with fire in his belly and is always striving for uniqueness in his role.

What do you have to say on the trend of finite TV series?
Every show has its own audience and it caters to its own unique mass base. Now the requirements of the viewers are changing and we see alterations in formats of TV shows. Change is constant and it is for betterment of all.

9 years ago i love the star cast!

kat and srk will rock for sure

suppose if it was the 90s actress instead of her, would have been better

9 years ago ewww seriously, wud only work if they r thinking to pair up SRK n Anuska nd make KAT their DAughter :P :P..
Nyway not interested,

9 years ago i am excited to see this. love u srk and also kat and anushka.

9 years ago seems like fun but will we ever get to see the rani & SRK jodi on screen again :(