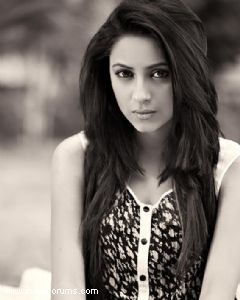 TV actress and former Bigg Boss Saath 7 contestant Pratyusha Banerjee believes Bollywood star Salman Khan, who hosts the reality show, is its soul. She says that without him, the show won't make any sense.

Her reaction was in response to rumors that Salman may not host the next season of the controversial show.

During an interview, when Pratyusha was asked to name any other Bollywood actor who could take over from Salman as the "Bigg Boss" host, she said:" I think 'Bigg Boss' just starts and ends with Salman Khan...Salman is the soul of 'Bigg Boss'."

"If he is not there in the show, then I think 'Bigg Boss' does not really make any sense. We all want Salman Khan to host it," she added.

Salman joined "Bigg Boss" in its fourth season and hosted even its last season Bigg Boss Saath 7. However, he reportedly has refused to host its next (eighth) season.

Since then, names of various other Bollywood actors are doing rounds to host the next season of this controversial show. However, superstar's reason not to host 'Bigg Boss' is still being speculated.

Meanwhile, Pratyusha's good friend and actress Kamya Punjabi, seen in the seventh season of "Bigg Boss", also wants to see Salman as the host for the show.

"Although I have watched each and every season of 'Bigg Boss' but I remember it since Khan saab (Salman Khan) started hosting it. In fact I eagerly used to wait for the weekend just to watch Khan saab's episodes of the show," Kamya said in an interview.

"So I remember 'Bigg Boss' all because of him. We all love him very much, respect him and I would always want to see him as the host for "Bigg Boss", she added.

The last season of Bigg Boss affected Salman's image as he was repeatedly accused of being partial to one of the contestants, Tanisha Mukerji. He was even criticized for repeatedly taking digs at another contestant Kushal Tandon.

Sneha.Love 6 years ago Pratyusha Banerjee, you were great in BB7. Love you dear, you rocks!!!

ahilajkula 6 years ago Pratyusha Banerjee , you are the best...We love you dear my girl,dear Prat.

ahilajkula 6 years ago Pratyusha Banerjee , you are the best...We love you dear my girl...

riya_ss9 6 years ago All the best Pratyusha Banerjee, very diplomatic.

LiliWorld 6 years ago All the best Pratyusha Banerjee :)

so cute Pratyusha Banerjee,miss you

lili045 6 years ago We love you Pratyusha Banerjee, I wish you all the best.

Avika.Gor 6 years ago Pratyusha Banerjee you rocks dear. And I agree with you that Salman Khan is soul of BB.