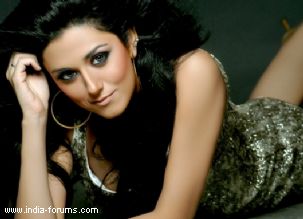 RaQesh Vashisth and his baliye Ridhi Dogra Vashisth are out of the show Nach Baliye season 6 but not eliminated. The duo decided to quit the dancing reality show due to RaQesh's injuries. He recently injured his knees and has been advised bed rest.

Clarifying the reason about opting out from the dance reality show Ridhi states, "Yes it's true but because of his ongoing daily soap, Qubool Hai RaQesh is continuing shooting for the show. It is manageable in a daily series but not in a dance reality show. Thus both of us decided to quit as it was taking a toll on his health."

Not only their family doctor but it seems that Bollywood superstar Salman Khan too advised RaQesh to take care of himself as Ridhi says, "Yes it is true that when Salman Khan came on the sets and came to know about RaQesh's condition, he too advised us to take care of his health first. He said 'You'll come to know when you cross 40. This kind of thing happened to me as well and today, I know how much I've gone through. So please take care and go for your health first'."

Knowing the fact that the finale was just two weeks away, the duo decided to back out from the competition as they didn't want to secure low marks and even the judge of the show Terence advised them to take care looking at RaQesh's condition, "It was very kind and polite of Terence Lewis to convey the same thing to us. We knew that it's just two weeks and everybody is working hard for the finale. There were times when we had to change our choreography because of the limitations. So I felt it's better to back out rather than harming the performance and securing low marks, says Ridhi.

So what is Ridhi looking forward to post Nach Baliye? "Well, currently I'm in Goa, attending a friend's wedding. RaQesh could not come due to his commitments though he is trying to get time out for one or two days. So for now I'll stay back and relax for some time. Let's see what happens next," explains the actress.

The pretty actress Ridhi is keen on doing romantic roles in future and says "I really want to do a romantic series. I like playing a character which is logical so I wish I get something different."

PrincessSJB 6 years ago Raqesh and Ridhi ignore all the hateful and negative comments - you both were a class act in Nach Baliye 6. I commend you both for understanding that health comes first and happy to hear about the advice Salman Khan gave you - he is a super human being! I am glad you did not sell your souls for a trophy and the big prize money! Health is Wealth!!!

Ezria_Fan_4ever 6 years ago ahww shes such a sweetheart,wish u n raqesh all d best, i wanna see u back on tv soon!!!

Kasu4lyfe 6 years ago Love you RaQesh and Ridhi! You both are greatly missed on Nach Baliye but wish you guys all the best!

Pyarme 6 years ago You are forever the best since Maryada you and Raqesh Vashisth your acting, bonding, friendship and your hot chemistry just amazingly awesome bless your jodi

aleyammakroy 6 years ago RIDHI, I REALLY ENJOYED WATCHING YOU WITH RAQESH.HOWEVER,YOUR HEALTH COMES FIRST, DO NOT WORRY YOU CAN ALWAYS COME BACK ON ANOTHER SET, IF YOUR HEALTH IS FIT,SO ALL THE BEST OF LUCK TO YOU & RAQESH.

Rach. 6 years ago Good luck to both of them for their future projects

FIZK6 6 years ago Watched Nach Baliye only for Ridhi Dogra Vashisth And Raqesh Vashisth. Now its over for me.