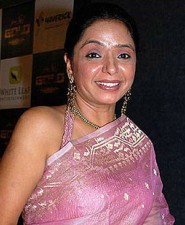 The talented actress Vaishali Thakkar who has rose to fame with the popular television drama Uttaran seems to be inspiring a lot from the young talent around her. The actress has won millions of hearts with the portrayal of her character Pravina in comic show Baa Bahu Aur Baby.

Vaishali is extremely delighted to have such a young talent around her and says, "I feel so happy to be around such talented people. Once I was doing a scene with Sparsh Khanchandani where I was yelling at her because she had stolen something during shooting for it. Sparsh started to cry a lot and when I asked her what happened she said she felt for real that she has stolen something. That was the moment I realized that performances done by child actors are very real. We actors know the craft of enacting a particular scene in a certain style but a child brings in an extra amount of real emotions on screen and that's the point when we feel we are not working with a child actor but with such wonderful talent."

We also asked her about whom she feels is better on screen Rashmi Desai Sandhu (Tapasya) or Tina Dutta( Ichcha) and she told us, "I feel Rashmi has immense sense of drama and she is sensitive, sharp and multi-talented on the other hand Tina is very passive and the way she gets an command over certain scenes it's very good. I take a lot of efforts to consistently work all the time over a character and the way she does it its commendable."

She further adds, "As an actor during my journey I have realized that it's never about who is a better actor its always about who gets a better opportunity. No matter how good an actor may be but if the actor does not get the right opportunity then the talent remains with the actor only."

Vaishali also feels that it's upon the actor on how much justice an actor gives to the character as she says, "I believe that it's the actor's craft which brings in a charm to the role and makes it popular."

We wish Vaishali all the very best for her future endeavors!!

mona1997 6 years ago Loved your character as Pravinaa in BBAB I was a really good show when u were in it. I didn't watch the show after you left.